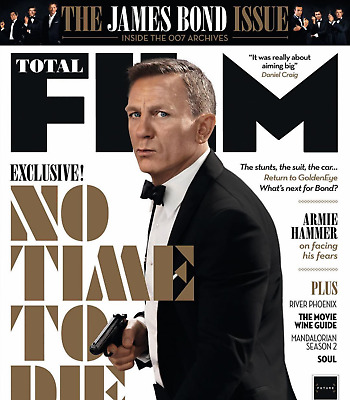 007 and Counting… It has been a frustrating few months, but as we eagerly await the release of the new James Bond movie in 2021, there are still plenty of things to tease our appetites in the meantime.

The new November, 2020, issue of the best-selling UK cinema magazine Total Film is a special James Bond issue, with a No Time To Die front-cover and plenty of exciting coverage of the new 007 movie, together with other aspects of the world of Bond.

The magazine was obviously designed and printed before the dramatic last-minute news broke that the new movie is now being delayed again until 2021 due to the resurgence of the pandemic, but that will make the issue an even better ‘must buy’ for Bond aficionados and those currently starved of all things 007.

In fact, collectors of hard-copy Bond magazines have certainly had a good year this year, even if we have been denied our big-screen ‘fix’. What’s in this new issue?

The main James Bond article, ‘The Long Goodbye’, written by Jordan Farley, explores some of the ‘untold stories’ behind the making of No Time To Die, and acknowledges that the film has been in a kind of ‘holding pattern’ since last March and the Corona virus crisis broke.

Interestingly, the article also senses that the new November, 2020, release date may not be set in stone and, as we all now know, this has turned out to be correct.

Nevertheless, there is much hear to please 007 fans. The article notes that the Bond producers, Barbara Broccoli and Michael G. Wilson, continue to face unprecedented challenges on an almost daily basis due to the pandemic, but they still see the film as the perfect movie for the present time. Broccoli told Total Film: ‘The thing that’s really wonderful about this film is that it celebrates heroism and service. It was always the intention of the movie that Bond represents bravery and personal sacrifice. And what better time to be making a film about that now?’

Concerning Daniel Craig’s swansong as 007, Broccoli commented to the magazine: ‘When you look at how the character’s evolved over these five films in Daniel’s hands, it did feel like we needed to complete the cycle with him’.

With reference to a possible post-Craig future for the franchise, Broccoli explained: ‘Once the film’s come out, then some time will pass, and then we’ll have to get on to the business of the future. But for now, we just cannot think about anything beyond Daniel’. 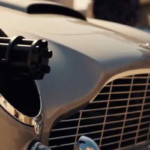 Focusing directly on NTTD, the Total Film article also explores the big stunt sequence shot in Matera, Italy, together with some analysis of the Aston Martin DB5 (apparently eight DB5s were specially built for the new film). There is also additional information on Bond’s clothes and suits in the movie, the shooting locations used, and the subaquatic glider (glimpsed in the teaser trailers). There is also some brief insight into the main song and Hans Zimmer’s work on the soundtrack for the movie.

The article on NTTD is then followed by ‘The 007 Files’, which involves the Bond producers providing their views on some rarely-seen stills and photos from  the history of the 007 films, starting with Dr. No and bringing things right through to the Dan Craig era.

The Total Film 007 special ends with an article entitled ‘Leap of Faith’, which concentrates on the 25th Anniversary of Goldeneye and looks at the epic stunt that took place in the pre-titles sequence, where a stuntman (Wayne Michaels) – doubling for Pierce Brosnan’s new Bond – undertook a daring leap off the Contra Dam in Switzerland, a stunt that even today still takes the viewer’s breath away! There is also some commentary from director Martin Campbell on his general approach to the making of the movie. And his secret to making a top-notch Bond movie? Campbell responded: ‘The fact is, you’ve got to do as good a job as you possibly can. I mean, it absolutely drives me, the idea of getting to the set and knowing what you’re doing and prepping correctly’. 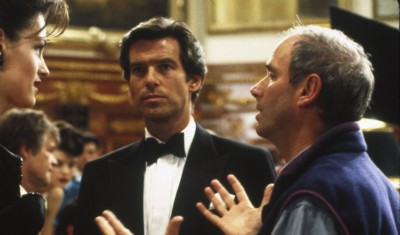