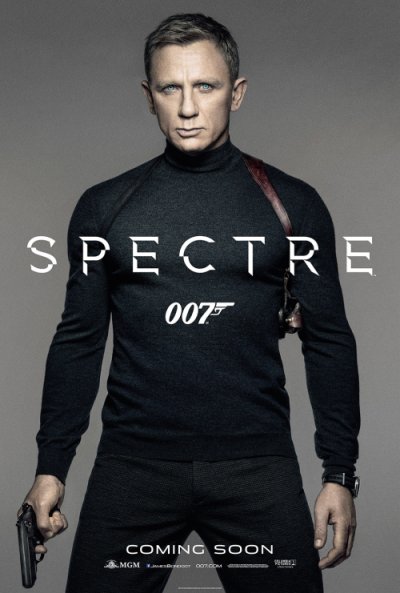 EON and SONY have released an exciting new SPECTRE teaser poster, which became available on 18th March. The new image shows 007 star Daniel Craig in a classic ‘Bondian’ pose, and is very reminiscent of the Roger Moore Bond pose used to publicise Live and Let Die (1973).

Interestingly, Roger Moore’s first 007 movie is apparently a favourite of both Daniel Craig and director Sam Mendes. The new image has Daniel standing with handgun by his side and wearing a shoulder-holster, as he looks directly into the camera, with the icy SPECTRE logo superimposed on the still.

Two versions of the image have been released, one in B/W and one with a hint of colour, the latter making use of Craig’s distinctive blue eyes.

The new image has been released with a just a few days to go before the SPECTRE main unit relocates to Mexico, where preparations and set construction have already been underway for the last few weeks. On 9th March EON announced that Mexican actress Stephanie Sigman had jointed the cast as ‘Estrella’, and it is expected that she will be part of the Mexican sequences, which are connected to the earlier part of the movie.

It is also expected that there will be a special press call for the media when the principal cast arrive in Mexico City, which will include Sigman and Bond producer Michael G. Wilson.