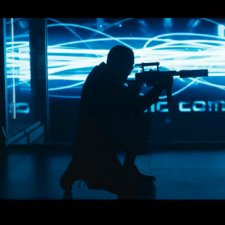 Internet disussion forums around the globe went into overdrive on July 31st when an exciting new theatrical trailer for ‘Skyfall’ was released online.

The new trailer provides Bond fans with further tantalising glimpses at some of the key scenes in the new 007 movie. One version of the trailer had already been shown in the previous two weeks at selected IMAX screenings of the new Batman movie, ‘The Dark Knight’, much to the delight of those lucky enough to catch it, but the full ‘international’ version appeared at 2.00pm on the afternoon of July 31st. A slightly different version was also released for the American domestic market at the same time.

Highlights of the new international version of the trailer include our first real look at the main villain, played by a blonde-haired and superbly menacing Javier Bardem, and a first taste of the meeting between the new ‘Q’ and 007 in the famous National Gallery in central London. Further brief dialogue scenes are seen involving Judi Dench, Ralph Fiennes and Daniel Craig.

The trailer also confirms that the MI6 building, near Vauxhall Bridge in London, does indeed experience a major ‘event’ (see previous JBIFC news items). We will not go into more detail as we are very aware that some people still wish to avoid major ‘spoilers’.

Furthermore, the trailer also provides some great scenes from the breath-taking range of action-packed stunt work that took place earlier this year in England and Turkey. We are in for a real treat from Sam Mendes and his dedicated crew.

At one point Craig’s Bond emerges from the shadows to report back for duty to ‘M’. No doubt 007’s boss was thinking the same as us: welcome back, Mr. Bond.