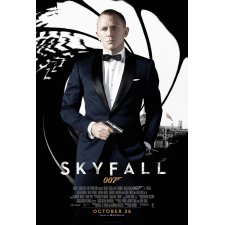 The new poster has Daniel dressed in 007’s tuxedo and carrying a gun, against the backdrop of the iconic gunbarrel and – in a nice teaser tribute to the plot of ‘Skyfall’ – the London skyline is also featured in the background of the poster.

The new poster builds upon the imagery of the previous teaser poster, which also made use of the gunbarrel. The intention of the film-makers seems to be to signal that the new Bond film will make use of some of the classic and iconic imagery that has been so intimately associated with the 007 series over the years, and holds a special significance in this year, the 50th anniversary of the Bond film franchise.

One movie poster collector told the JBIFC: ‘This is bound to become a collector’s classic. It’s a great design. They seem to be pulling out all the stops on this movie. It’s going to look fantastic on the giant billboards’.