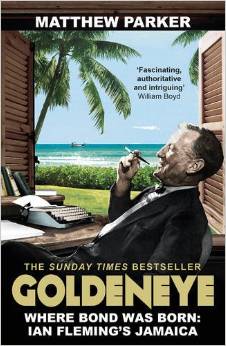 The acclaimed biography by Matthew Parker of 007 author Ian Fleming, Goldeneye: Where Bond Was Born: Ian Fleming’s Jamaica, which first appeared in 2014, is being published in paperback on May 21st, 2015.

The new Windmill paperback edition will retail in the UK at £9.99. When it was first published, Matthew Parker’s very well-reviewed book entered the prestigious ‘Top 10’ Sunday Times Bestseller List.

As many Bond fans know, Ian Fleming had fallen in love with the beautiful Caribbean island of Jamaica when he first visited the location during the Second World War, while he was serving in Naval Intelligence. He subsequently purchased a plot of land on the north coast for his new home there in 1946. The new residence was named ‘Goldeneye’ after one of his secret wartime intelligence operations.

The very first James Bond adventure, Casino Royale was written there in 1952, and Jamaica featured in three Bond novels and also in some of the short stories. The island, for Fleming, offered a haven of personal peace and exotic life, and an escape from the grey realities of ration-book Britain in the 1950s. Goldeneye had lovely views of the sea and sky, a Sunken Garden with plenty of flowers, humming birds and other colourful wildlife, and its own private beach. And, of course, it was at ‘Goldeneye’ where Fleming took the name of his secret service hero from one of his favourite books, Birds of the West Indies, which he kept on a shelf in his study there.

The hardback edition of Parker’s biography, when it was published by Hutchinson last year, was very well received by both James Bond aficionados and general critics alike. James Bond novelist William Boyd, author of Solo, said Parker’s book was a ‘completely fascinating, authoritative and intriguing book – especially for anyone interested in Ian Fleming and the James Bond phenomemon’. Similarly, John Pearson, author of The Life of Ian Fleming, who had also worked with the Bond author as a journalist at the Sunday Times, said Parker’s book was ‘Supremely enjoyable’ and had ‘created a completely new picture of Fleming, Bond and the role of Jamaica in the making of the legend’.

Cultural critic Tony Parsons also decided that Parker’s new biography was the ‘BIG BANG OF BOND BOOKS – the world-weary romance, the impossible glamour, the sex, the travel, the legend, the longing for escape and adventure – it all starts here’.

Ian Fleming undoubtedly adored Jamaica, spent long vacations there, and a considerable number of his experiences and observations of the island helped influence the Bond novels. As he commented himself in 1963: ‘My own life has been turned upside down at, or perhaps even by, the small house named ‘Goldeneye’ I built on the north shore, and by my life in Jamaica’.

Matthew Parker’s book, which is rich in detail and historical context, is a must-have purchase for anyone who is beguiled by Ian Fleming’s life and his iconic fictional creation James Bond, or is intrigued more generally by the politics of Jamaica in the run-up to full independence.

At one point in his book Matthew Parker recounts the now famous story of what happened when Ian Fleming asked Noel Coward, his near-neighbour in Jamaica, whether the playwright would consider playing the title role in the first James Bond film, Dr. No.

Bond producer Albert ‘Cubby’ Broccoli agreed with Fleming that having Coward in the role would be a ‘brilliant idea’, and asked the Bond author to approach his good friend with the offer. Fleming sent a cable to Coward and received a swift response by telegram: ‘Dear Ian. The answer to your suggestion is No… No… No… No! Thank you. Love Noel’.