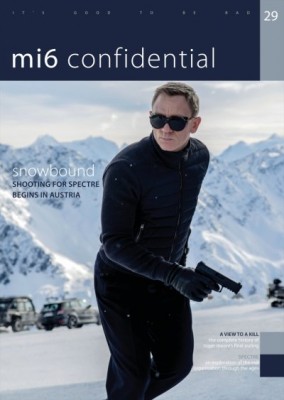 The latest issue of the popular and glossy MI6 Confidential magazine, no. 29 in the series, is now on sale, and devotes considerable space to the early stages of the new James Bond adventure SPECTRE, as well as celebrating the 30th anniversary of A View To A Kill (1985).

The contents of the latest issue include:

Snowbound: An early look at the production of Bond 24, now officially titled SPECTRE.

The Many Faces of Blofeld: An exploration of the notorious arch-villain Ernst Stavro Blofeld and his organisation, as portrayed on the big screen.

Kevin McClory Interviewed: An interesting interview with the late Irish producer from 1979, as he was trying to launch his rival James Bond project.

Spectre in Print: An exploration of Blofeld’s sinister organisation in both the original Ian Fleming 007 books and in the John Gardner continuation novels.

Dance into the Fire: A complete history of Roger Moore’s final outing as 007.

The Bond Connection: A look at the new espionage movie Kingsman, which pays homage to a number of spy genres, including the 007 series.

As usual, the new issue of the magazine has a nice spread of colourful stills, including an official photo on the front cover of Daniel Craig taken from the recent SPECTRE filming in Austria.

MI6 Confidential magazine no. 29 (February, 2015) is now available, and would be a great addition to your collection.

Richard Maibaum and Michael G. Wilson, who developed and wrote the screenplay for A View To A Kill, originally floated the idea in a very early version of the storyline to have the villain Max Zorin manipulating the course of Halley’s Comet in order to destroy California’s Silicon Valley.