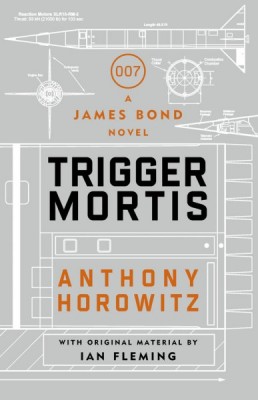 A press release issued to the media early today (May 28) gave 007 fans some key advance details on the plot to the new James Bond novel written by Anthony Horowitz, including it’s title: Trigger Mortis.

On what would have been Bond creator Ian Fleming’s 107th birthday, best-selling author Anthony Horowitz revealed that the secret agent’s new adventure begins in 1957, a mere two weeks after the events that took place in Fleming’s novel Goldfinger.

Horowitz’s new Bond book places 007 in the middle of the Soviet-American ‘Space Race’ of the late 1950s, as the United States prepares for a critical rocket launch. And, in a major surprise for Bond aficionados, Horowitz has brought back one of the most famous of Ian Fleming’s Bond girls: Pussy Galore!

As well as Pussy Galore, Horowitz’s new 007 adventure features a brand new Bond girl named Jeopardy Lane, while the central villain of the new story is a sadistic and scheming Korean adversary named Jai Seung Sin. Uniquely among the James Bond novel continuation authors, Horowitz was also very fortunate to have been given access to some unused Ian Fleming storyline material: a short treatment titled Murder on Wheels, which was the basis of an episode of a 007 TV series that never got off the ground. Fleming’s text placed James Bond in the high-octane world of 1950s motor-racing, and it is this never-used plot material that kicks off the action in Trigger Mortis.

Horowitz commented: ‘It was always my intention to go back to the true Bond, which is to say, the Bond that Fleming created and it was a fantastic bonus having some original, unseen material from the master to launch my story. I was so glad that I was allowed to set the book two weeks after my favourite Bond novel, Goldfinger, and I’m delighted that Pussy Galore is back! It was great fun revisiting the most famous Bond Girl of all – although she is by no means the only dangerous lady in Trigger Mortis. I hope fans enjoy it. My aim was to make this the most authentic James Bond novel anyone could have written’.

The new Bond author was commissioned and authorised for the project by Ian Fleming Publications and the Ian Fleming Estate. Lucy Fleming, the niece of Ian Fleming, said Horowitz’s new story was a ‘brilliant present for Ian’, which ‘could have come from Ian’s own typewriter. Anthony has cleverly incorporated Ian’s original ideas into his own plot to produce a Bond book to remember’.

British newspapers were certainly enthusiastic about the new plot details. Typical was The Times newspaper (May 28), which headlined it’s report: ‘007 is back… and so is Pussy Galore’. The newspaper’s coverage was illustrated by the now-famous image of Honor Blackman as Pussy from the EON movie version of Goldfinger. Similarly, the UK’s Daily Express newspaper (May 28) carried a still of Honor Blackman on its front page, proclaiming: ‘Pussy Galore: Glamorous Bond Girl Returns in New 007 Novel’. Its story inside also claimed that ‘Pussy is purring again’. The UK’s Daily Telegraph (May 28) entitled its equally detailed coverage: ‘Surprises Galore in new Bond novel based on Fleming script’.

There was also evident enthusiasm from London’s free commuter newspaper, Metro (May 28), which told its readers: ‘Pay attention, 007 – you’re getting back with Pussy…’.

2015 is going to be a bumper year for 007 fans: a new Bond novel in September and then, just weeks later, the new film SPECTRE will hit the cinema screens. Double-O heaven!

The new James Bond novel by Anthony Horowitz will be published by Orion Publishing in the UK on September 8, 2015.

In Ian Fleming’s unused treatment Murder on Wheels, which was going to form part of a 007 television series, James Bond is called into M’s office at Secret Service HQ for a mission to make sure that a devious Russian plot to sabotage the famous racing car driver Stirling Moss is intercepted and thwarted. As Bond fans know, Fleming loved cars, especially super-charged high-speed sports cars, and took a close interest in the world of British motor sport.