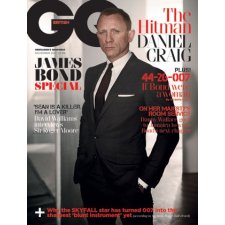 The new November issue of the British GQ magazine is a James Bond special, with 42 pages devoted to various 007-related articles and interviews.

The special issue of GQ (Gentleman’s Quarterly), which has just hit news-stands in the UK, has a smartly-suited Daniel Craig on the front cover, but can also be purchased with another of the six Bonds on the front cover (six ‘collectors covers’ are available in total, with a choice of Craig, Moore, Brosnan, Connery, Lazenby or Dalton).

The November issue includes an article on Ian Fleming’s Jamaican home ‘Goldeneye’, a ‘Dossier’ by Judi ‘M’ Dench on Daniel Craig, an article on a possible female James Bond, an analysis of Fleming’s literary style, and an interview with Sir Roger Moore (conducted by comedian and celebrity Bond fan David Walliams).

In his interview with Sir Roger, which took place at the Hotel de Paris in Monte Carlo, David Walliams managed to tease out some fresh and interesting information, including Roger revealing that ‘The Spy Who Loved Me’ was originally going to be followed by ‘For Your Eyes Only’, and that he was not all that keen on 007 going into space for ‘Moonraker’.

When asked about the 50th anniversary of the series, and whether he thought the franchise will be around for another fifty years, Sir Roger said: ‘I see no reason why not’. The third 007 said that Barbara Broccoli had inherited the same thing from her father Cubby and from Harry Saltzman – which is that they didn’t cheat the audience: ‘Spend the money, put it all on the screen’.

Other highlights in the new GQ include a wardrobe display by the new ‘Q’ Ben Whishaw, an interesting appreciation of Timothy Dalton’s period as 007, and a ‘Fauxbituary’ of James Bond (a fictional obituary, detailing Bond’s career and his life after leaving MI6).