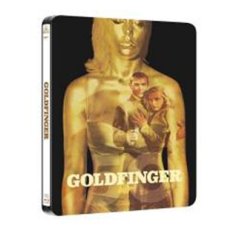 Using material from the archive of EON Productions and other unique sources, the special Limited Edition Steelbook, to be released on September 22, 2014, will feature sketches of the iconic Aston Martin by legendary Production Designer Sir Ken Adam on the inside of the case, and it will undoubtedly become a true collector’s item.

Still seen by many Bond fans, movie historians and general film critics (such as the BBC’s Barry Norman) as the quintessential 007 film of the 1960s, and indeed one of the best of the long-running EON James Bond movie series, Goldfinger wowed cinema audiences back in 1964 with many of the ingredients that would come to define the Bond film formula: a highly memorable main baddie (Auric Goldfinger, played by Gert Frobe), an even more memorable henchman (‘Oddjob’, played by former wrestler Harold Sakata), beautiful women (such as Shirley Eaton, Honor Blackman and Tania Mallet), superb John Barry music, and a range of ingenious gadgets supplied by the head of ‘Q’ branch (the wonderful Desmond Llewelyn).

Masterfully directed by Guy Hamilton (who went on to direct Diamonds are Forever, Live and Let Die, and The Man with the Golden Gun), the third James Bond adventure starred Sean Connery as the supremely-confident 007, who nevertheless nearly meets his match in Gert Frobe’s villain, the ‘man who loves gold’.

Taking Ian Fleming’s secret agent to exotic locations from Geneva to Miami (mainly via Pinewood Studios!), the movie culminated in the attempted implementation of Goldfinger’s ‘Operation Grand Slam’, a devious plan to detonate a ‘dirty’ radioactive bomb in America’s Fort Knox bullion repository, and thus drive up the value of Goldfinger’s own personal wealth in the process.

The new Anniversary Goldfinger Steelbook will include the following special features:

Miss Honey & Miss Galore Have James Bond Back For More

Original Radio Interviews with Sean Connery and Other Radio Spots

Members of Cast and Crew

The Making of Goldfinger

Sean Connery From The the Set of Goldfinger

On Tour With the Aston Martin DB5

‘007 Mission Control’ Interactive Guide Into the World of Goldfinger

The release date for this not-to-be-missed Goldfinger Anniversary Steelbook is September 22, 2014, and the UK price will be £24.99 Blu-ray.

Screenwriter Richard Maibaum began adapting Ian Fleming’s novel Goldfinger for the big screen in April, 1963, just as From Russia With Love started production at Pinewood. Maibaum quickly realised that he would have to strengthen certain aspects of the story as set out in Fleming’s original novel: in the movie version, Bond now discovered Jill Masterson’s gilded body, instead of just hearing about it from her sister, Tilly.

This was a truly inspired decision by Maibaum, as it made for one of the most dramatic scenes in the movie. Moreover, whereas Ian Fleming had Goldfinger actually stealing gold from Fort Knox (imagine the sheer weight and logistics of that!), Maibaum changed the storyline so that, instead, Goldfinger’s plan was even more ambitious: the value of the Fort Knox gold would be destroyed with an atomic blast, allowing Goldfinger to virtually corner the world’s gold market.