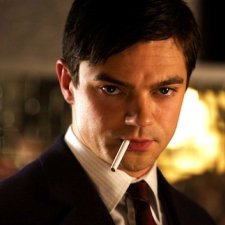 Brief details have been released on a new four-part TV biopic about the wartime life and career of Ian Fleming, starring a rising theatre and movie actor as the famous creator of James Bond, to be screened later this year.

According to a report in the movie trade paper Variety on January 17, the young British actor Dominic Cooper, best known for his roles in The History Boys and Mamma Mia, will play the 007 author in the four-part mini-series, which is provisionally entitled Fleming and is mainly set during World War Two.

Written by John Brownlow and Don Macpherson, and directed by Mat Whitecross, the drama will apparently explore Fleming’s wartime experiences as a Naval Intelligence officer, a key figure who was witness to, and sometimes at the heart of, some of the most creative espionage escapades of the War. The new mini-series has been greenlit by UK-based BSkyB’s ‘Sky Atlantic’ satellite and cable channel. It will be produced by Ecosse Films and co-produced by BBC America.

The report in Variety quoted Cooper as saying: ‘Stepping into the shoes of the spy who not only created the enigmatic character of 007, but who fantasized about being him has to be every actor’s dream’. Cooper, a rising star in the UK, already has considerable experience on both the stage and in films, including The Devil’s Double, Captain America: The First Avenger, The Duchess, and, more recently, Abraham Lincoln: Vampire Hunter.

Executive Producer Douglas Rae, the Scot who founded Ecosse Films in 1988 and has executive produced all the company’s productions since then, also claimed: ‘Ian Fleming’s story is as dramatic and entertaining as any of the Bond films’. Ecosse has a good track-record in producing high-quality drama for TV and film. It was behind the long-running BBC drama Monarch of the Glen, and recently produced Camelot, the 10-part series for the UK’s Channel-4, transmitted in 2011. It’s most successful production was undoubtedly the movie Mrs. Brown, which starred Judi Dench and Billy Connolly. The film saw Dench nominated for a Best Actress Oscar in 1998. She also won a 1998 BAFTA film award for Best Actress for the same movie.

Ecosse Films will shoot Fleming on location in the UK and in Hungary, and it will be broadcast on Sky Atlantic in late 2013. The news in Variety also raises the intriguing possibility that there will soon be two new biopics about Ian Fleming on our screens: in May, 2012, it was revealed that the British director Duncan Jones was to helm a film about the Bond author.