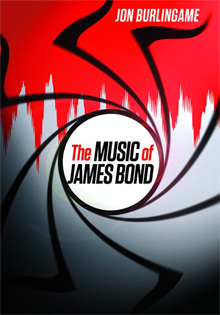 Oxford University Press have announced that the new paperback edition of Jon Burlingame’s superb book The Music of James Bond, due in August or September, will include a new chapter on the most recent Bond movie Skyfall.

Burlingame’s authoritative study, which was first published in hardback in October 2012 to coincide with the 50th anniversary of the James Bond movie series, has become a key reference book both for Bond scholars and general film music enthusiasts alike.

Starting with the evolution of Monty Norman’s theme music for Dr. No (1962), Burlingame explained how John Barry was brought in to ‘ratchet up the excitement level’, and this general approach became a key template for much of the subsequent work of the various Bond music composers, producing some of the most memorable film music tracks in cinema history.

Ranging from Norman and Barry’s collaboration on the first Bond movie, through all the Bond composers (including the non-official ones), and up to and including Quantum of Solace (2008), the first edition of the book contained a chapter devoted to each of the Bond films, providing the main backstory and some highly entertaining behind-the-scenes anecdotes.

Burlingame, who teaches film and TV music scores at the University of California, is one of America’s leading experts on movie soundtrack compositions, so it will be really fascinating to read what his thoughts are on the award-winning music for Skyfall.

Did you know? James Bond producer Harry Saltzman, who famously brought James Bond to the screen in a partnership with Albert R. Broccoli, had some controversial views on the music for the Bond movies. According to Burlingame, Saltzman at one point even referred to John Barry and Shirley Bassey’s theme song for Goldfinger (1964) as ‘the worst song I’ve ever heard in my goddam life. It’s terrible. If it weren’t opening in three weeks time, I’d take it out’. The song went on to become a smash-hit and reached no. 8 in the U.S. music charts.