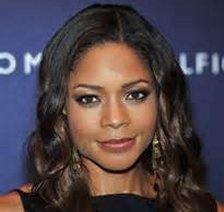 Actress Naomie Harris, who played Eve Moneypenny in Skyfall and will soon reprise the role when Bond 24 commences filming later this year, is currently shooting scenes in another type of spy movie, Our Kind of Traitor, which is nearing the final stages of its 10-week production schedule.

Set mainly in contemporary, recession-gripped Britain, the gritty new movie is based on espionage writer John Le Carre’s best-selling novel of 2010 (his 22nd novel, no less), and is directed by Susanna White. It has a screenplay by critically acclaimed writer Hossein Amini. Naomie Harris is playing the part of barrister Gail Perkins, opposite Ewan McGregor, who plays Perry Makepeace, a University lecturer.

At one stage earlier this year, Ralph Fiennes (the new ‘M’) was going to take a key role in the movie as a Russian named Dima, but he withdrew, and was replaced by Stellan Skarsgard (of The Girl With The Dragon Tattoo). Interestingly, Mads Mikkelsen (of Casino Royale) was also once briefly attached to the movie when it was first announced.

Director Susanna White oversaw some early non-acting scenes for the movie before principal photography began: they were shot in a Finnish forest near the Arctic Circle (which is standing in for woodlands near Moscow). The movie then commenced main filming in England on March 26, with Harris and McGregor.

The storyline sees a young Oxford academic (Makepeace) and his barrister girlfriend (Perkins) on holiday in Marrakech, in Morocco, when they bump into Dima (played by Stellan Skarsgard).

Dima is a Russian millionaire and villa-owning oligarch, who appears to just want a friendly game of tennis, but in reality has another agenda. He is actually a big-time money launderer, with knowledge of terrorist activities, and is involved in the murky world of East European crime syndicates and their underworld links to big business and secret government circles. The shady Dima soon reveals to the young English couple that he plans to defect, and would like their help. He persuades them to help him and his extended family defect to the UK, but in the process he embroils them in a complex plot where they are soon positioned between the Russian Mafia and the British Secret Intelligence Service (SIS), and they can trust neither.

Set mainly in the City of London and the English Home Counties, other locations include Paris, Moscow, Morroco and the Swiss Alps. Harris and McGregor have also been joined in the movie by Damian Lewis (of Homeland fame), who has a major role as Hector, a British Intelligence officer, and also by actors Mark Gatiss and Jeremy Northam.

Late March saw some sequences with Damian Lewis being shot on the sandy banks of the River Thames, at low tide, with Lewis’s character Hector engaged in a long mobile phone call as he walks along the shore near the River. A number of onlookers commented that Lewis was dressed a bit like Michael Caine’s spy Harry Palmer, complete with short mac and dark-rimmed glasses.

April saw some key scenes with Harris and McGregor being shot in London, which was doubling up for Switzerland, complete with cars with Swiss number plates.  Damian Lewis was also spotted recently doing some night filming on location at Arsenal Football Club’s Emirates Stadium in North London, and some UK newspaper reports noted his ‘Harry Palmer’ look was evident again. He was joined by Mark Gatiss, who is playing Hector’s colleague, Luke.

Our Kind of Traitor, is being produced by Le Carre’s son, Simon Cornwell (John Le Carre’s real name is David Cornwell), together with his other son Stephen, both of The Ink Factory, and Gail Egan of Potboiler Productions. The other production companies involved are StudioCanal and Film4.

According to recent comments by one of Le Carre’s sons, the role of Gail (played by Naomie Harris) has been ‘built up in a more and more interesting way’ for the movie version of Le Carre’s novel.

Once Harris has completed her work on the movie, which is due to complete main filming at the end of May, it is thought she will begin preparations for Bond 24, which commences in either October or November (depending on which report you read). Earlier this year, speaking about the next 007 adventure in the January issue of Total Film, Harris said that, as well as Moneypenny being seen behind a desk, she imagined ‘they would get her back out in the field’.  She also praised Daniel Craig as ‘a brilliant Bond for our times’.

In March, barely a week before she began work on Our Kind of Traitor, Naomie was also one of the special guests who helped the Bond producers launch the re-located Bond In Motion exhibition in central London.

John Le Carre, who first shot to international fame as an author with his third spy novel The Spy Who Came In From The Cold (1963), was a real-life British Intelligence officer. At the height of the Cold War, he became an officer for MI5 in 1958, dealing with domestic spy cases. In 1960, he transferred to the Secret Intelligence Service (MI6), and worked undercover for MI6 in West Germany.

His experiences on the ‘front line’ of the Cold War were reflected in the grey, rather morally ambiguous world of espionage portrayed in his novels, the first two of which he wrote while still employed as an Intelligence officer. The success of his third novel encouraged him to leave MI6 and take up thriller writing as a full-time profession.

Did you know? The movie version of The Spy Who Came In From The Cold (1965), starring Richard Burton and Claire Bloom, also had a small role for Bernard Lee (‘M’ in the Connery Bond films) as the character Patmore.