More Speculation on Mendes and Bond 24 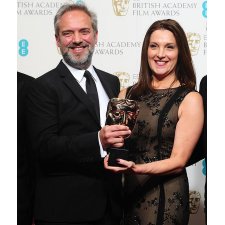 Will he or won’t he? According to a British popular newspaper, Skyfall director Sam Mendes is ’75 per cent’ of the way towards agreeing to helm the next 007 adventure, which will be Bond no. 24 in the 50-year old franchise.

Writing in the UK’s Daily Mail newspaper on February 15, the showbiz gossip columnist Baz Bamigboye, who has a fairly reliable track record when it comes to James Bond-related news, returned back to a topic he raised earlier this year in the same newspaper (on January 11): whether Sam Mendes will agree to direct the next 007 movie.

Under the headline ‘Mendes has Bond back in his sights’, Bamigboye reheated the basics of his earlier January story, but with slightly more detail. He noted that, given the phenomenal box-office success of Skyfall, people have been asking whether Mendes will return. Bamigboye claimed that the Oscar-winning director had ‘initially been reluctant’ because screenwriter John Logan was planning to write a two-part story that would have been shot back-to-back (something, by the way, that 007 actor Daniel Craig has firmly denied).

According to Bamigboye, if Mendes had agreed to this, it would have taken four years out of the director’s life, and would also have meant long stretches for the main cast, too. Bamigboye claimed: ‘That plan has been jettisoned, and Bond 24 and 25 will be stand-alone pictures’. He added: ‘Mendes hasn’t firmly made up his mind about directing another Bond, but I’m reliably told he’s ’75 per cent’ of the way towards doing it’.

Stretching out his latest report even further, Bamigboye also told his Mail readers that: ‘At present, Logan’s thoughts for Bond 24 are in the form of two treatment papers outlining a rough idea of the plot. So, in theory, Mendes is on board, but wants to see the finished script before he fully commits’. The Daily Mail  columnist continued: ‘The only people who have seen the Bond 24 blueprint are Barbara Broccoli and Michael G. Wilson (the extraordinary producing duo behind the 007 franchise), Mendes, Craig and a handful of key executives at Sony and MGM’.

As Bamigboye noted, if Mendes does agree to do Bond 24, he will not be able to give it any full-time commitment until he has finished directing Simon Russell Beale in the play King Lear, which opens at London’s National Theatre in January, 2014. In the meantime, Mendes is adding the finishing touches to his new musical verson of Roald Dahl’s Charlie And The Chocolate Factory, which begins public performances at the Drury Lane Theatre in London in May of this year.

One has to feel a bit sorry for Mendes. When Skyfall won two major awards at the BAFTAs ceremony earlier this week, the director gave a really thoughtful and gracious speech when accepting the main award, and paid generous tribute to the 1,292 cast and crew who were all involved in making the movie a smash-hit success. Backstage at the BAFTAs, however, he was faced afterwards with numerous questions from the press about whether he will helm Bond 24. The speculation looks set to continue for some time to come.