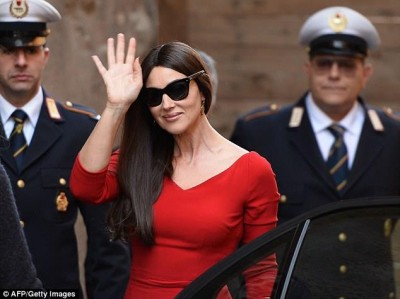 Beautiful Italian actress Monica Bellucci, who has the crucial role of Lucia Sciarri in the next James Bond movie SPECTRE, has given two major interviews to British newspapers recently, and offered some of her thoughts on why she was selected for the role by director Sam Mendes.

Speaking to the ‘Event’ supplement of the UK’s Mail on Sunday newspaper, Monica revealed her initial response on being approached and selected: ‘My first thought was, “How can I be a Bond girl at 50?” After my audition Sam Mendes told me that, for the first time in history, he wanted a woman of a similar age to the actor playing Bond. I told Sam he would be a hero among women for casting me in SPECTRE‘.

She continued: ‘Compared to the Bond girls who have gone before, I am so much more mature. I’d prefer to be called a Bond woman or perhaps a Bond lady’.

In fact, Monica, in accepting the key role of Lucia Sciarri, has arguably become the fifth Italian to play a Bond woman (following Daniela Bianchi in 1963; Luciana Paluzzi in 1965; Maria Grazia Cucinotta in 1999; and Caterina Murino in 2006).

Back in Italy, she is often just known as La Bellucci, and is regularly placed alongside some of the classic beauties of the Italian cinema, such as Sophia Loren, Monica Vitti and Claudia Cardinale, to name just a few. And, according to the Mail, her image as a sexy older woman is one she is very happy to play along with.

In a separate interview, given to the ‘Style’ supplement of the UK’s Sunday Times magazine, Monica, who was also given a special photo profile in the magazine, revealed that she initially believed she might be auditioning to replace Dame Judi ‘M’ Dench!

She said: ‘My agent called me and said, “Sam Mendes wants to see you for Bond”‘. When she flew to London for dinner with the director, Bellucci arrived at the restaurant confused: ‘I just blurted out, “I’m not a girl, I’m a mature woman. Do I have to replace Judi Dench?” He was laughing, and I was, like, “Why do you call me? I’m 50 years old. What am I going to do in James Bond?” He said, “For the first time in history, James Bond is going to have a story with a mature woman. The concept is revolutionary”‘.

Bellucci has recently been filming in both London (at Pinewood) and in Rome, including a scene where she is attending an internment at an Italian cemetery, which also involves a visit by James Bond (Daniel Craig joined her for the day’s filming). At Pinewood, set designers constructed a bedroom interior of a villa, where Sciarri apparently encounters 007 again.

Interestingly, in a special profile of Bellucci for the new edition of the UK’s Empire movie magazine (April, 2015), Bond producer Barbara Broccoli revealed that EON had been very interested in employing the Italian beauty previously in the franchise: ‘We had wanted her a couple of times in the past, and it didn’t work out. I was really afraid that she was going to be the one that got away. I couldn’t be more pleased that we finally got her in a Bond movie, and in a really great role’.

We are sure 007 would definitely echo that sentiment!