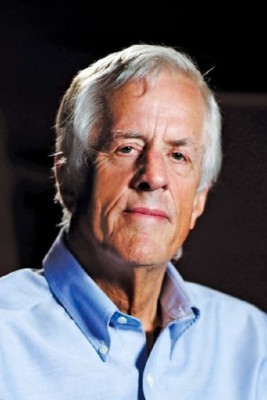 The JBIFC is very sad to report that the Bond director Michael Apted has died, aged 79. As well as being responsible for the nineteenth James Bond movie, The World Is Not Enough (1999), starring Pierce Brosnan in his third 007 adventure, the award-winning British director was also hugely respected for his documentaries, including the ground-breaking series Seven Up, which had followed the lives of 14 children since 1964.

Apted, who was born in 1941, was appointed as TWINE‘s director in August, 1998, and was a surprise choice for Bond, not least to himself, as he had not really regarded himself as an ‘action’ movie director up to that point in his career. However, the producers explained that they were not looking for an ‘action’ director as such but, rather, a good ‘storyteller’. Never one to avoid an interesting challenge, Apted agreed to take the job and, as production commenced, appeared to relish the opportunity to bring some ‘Fleming’ back to the series, with a strong emphasis on the storyline and on drawing out some interesting interplay between the central characters.

Indeed, Apted was very keen to strengthen the backstory and motivations of the main players in the script for TWINE. To this end, he brought in his wife, Dana Stevens (who was a skilled screenwriter) to work on the women’s roles in the movie, and Apted himself brought screenwriter Bruce Feirstein back to the team (Ferstein had worked on the two previous Brosnan Bond films). In their debut Bond film, there was a very thoughtful story from two young British screenwriters, Neal Purvis and Robert Wade, based upon an idea about an oil pipeline originally put forward by Barbara Broccoli. Stevens and Feirstein were able to work on this story and further develop the Purvis and Wade material into a movie fit for the eve of the new millenium.

Filming on the movie began at Pinewood Studios in January, 1999, and – while Apted tended to concentrate on the main storyline sequences with the key actors – many of the ‘action’ sequences (especially those shot on the River Thames in London) were placed in the very capable hands of Second Unit director Vic Armstrong, with occasional oversight from Apted and his First Unit. It proved a winning combination.

Apted was also able to draw out some greating acting from Pierce Brosnan, who embraced Apted’s directing style with enthusiasm. In turn, the director was full of praise for Brosnan and the actor’s preparedness to show a more vulnerable side to James Bond. Speaking at the time, and reflecting upon his own directoral approach to Bond, Apted commented: ‘I don’t want to repeat what others have done but I still want to deliver the things people expect’.

TWINE was premiered in November, 1999, and was another smash-hit for the EON franchise. Speaking in response to the sad news of Apted’s passing, the 007 producers Barbara Broccoli and Michael G. Wilson said that he ‘was a director of enormous talent’ and was ‘beloved by all those who worked with him’.