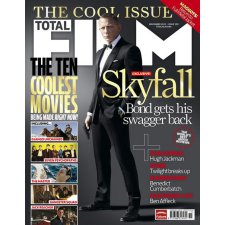 The new issue of the popular British movie magazine ‘Total Film’ contains some coverage of James Bond and ‘Skyfall’, and mentions a test-screening of the new movie which took place in early September.

The new issue of the best-selling magazine, which has Daniel Craig on the front cover standing in his tuxedo, with Walther in hand, reveals that 100 fortunate people were able to attend a test-screening of the 23rd Bond movie, and that director Sam Mendes had already shown the film to Daniel Craig, to producers Barbara Broccoli and Michael Wilson, and to the heads of Sony, all of whom loved it.

Mendes told the magazine: ‘The stamp of approval came when we did the preview. The 100 people at the preview had no vested interest. They tell you what they think. So that was the moment when the movie came into being’.

Turning to ‘Skyfall’ in general, the magazine’s reporters were able to wander around Pinewood Studios last April 10-11th (days 94 and 95 of the 133-day shoot) and were given a good insight into the scale of Mendes’ vision. One mammoth set  (a casino in Shanghai) had taken production designer Dennis Gassner and his team 10 weeks to build. And up past the 007 Stage, on what is known as Goldfinger Drive, the production team had also built an abandoned Chinese town, where Bond first meets the main villain Silva (Javier Bardem). The ‘Total Film’ reporters were also able to see the interior of an MI6 bunker, and a reproduction of the inside of London’s Charing Cross tube station.

The magazine reveals a surprising number of small plot spoilers, but also has some interview material with Judi Dench, where she remains very tight-lipped about her role and function in the movie. In addition, there are some general comments from Sam Mendes, including his view that: ‘I wanted to make a great Bond movie. A great movie, full stop. I wanted to go back in tone, back to Ian Fleming’.

Further on in the article, Mendes comments on his approach to the villain in Bond movies: ‘The tradition of the great Bond villains is they’re flamboyant. Dr. No, Rosa Klebb, Oddjob. But at the same time, when Bond arrived, there were no comic-book movies, no Spider-Man, no Marvel. Now every movie attempts to have an iconic baddie… I needed someone who had the power to carry it off: flamboyance but also a sense of physical power, of reality. We were very lucky Javier said yes’.