French actress Blanche “Dolly” Ravelec (She played Jaws girlfriend Dolly in Moonraker) and Richard “Jaws” Kiel will be appearing in Southern England in late May at a couple of events . They will be appearing on Saturday May 25th Between 10:00 AM – 5:00 PM at the Mountbatten Center in Portsmouth 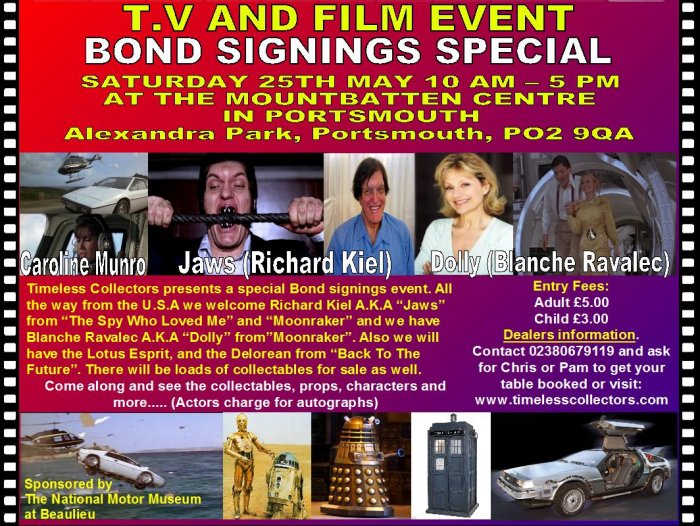 Then on Sunday May 26th they will both be appearing at the Bond car Exhibit in nearby Beaulieu that has 50 Bond vehicles.  Fans will be able to take photos with them in front of the underwater Lotus car exhibit and see all 50 James Bond vehicles.

On Monday May 27th they will be screening “The Spy Who Loved Me” a The Misty Moon Galleries in London  http://www.wegottickets.com/event/214000  and Richard “Jaws” Kiel will be there to do a Q&A, take photos and to sign autographed photos.

Finally, Barbara Broccolli’s play “ONCE” which has won 8 Tony Awards including “Best Musical” will be playing in London and Bond fans will want to see it.

Here is a video on You Tube about the play.