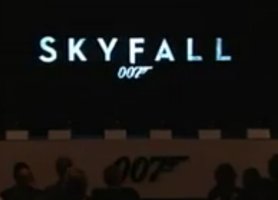 There has been some extensive coverage of the latest ‘Skyfall’ filming in Istanbul, including a new round of interviews with Daniel Craig.

Articles and reports have appeared on the MSN website, on Sky News, on ITV’s ‘Daybreak’, and on the Daily Mail’s website, to name just a few. The latest footage to emerge from the filming in Istanbul shows director Sam Mendes giving directions to cast and crew, together with stunt co-ordinator Gary Powell. A sequence was being filmed near Istanbul’s famous (and old) New Mosque, where the production team have recreated the city’s popular spice market.

Footage was also seen of a smartly-suited Daniel Craig as 007 leaping out of a landrover and knocking over a market trader’s stall as he rapidly fires off some shots with his Walther PPK. The sequence leaves the trader’s oranges scattered on the ground. Pigeons were also sent flying away in panic, together with various passers-by ducking for cover (played by extras). Scenes have also been shown of Naomie Harris’s character Eve driving the landrover at some speed.

Snippets of the latest round of media interviews given by Craig have also been inserted into the latest filming reports. On May 2, the UK’s ITV breakfast programme ‘Daybreak’, for example, carried a brief interview with the Bond star, carried out by reporter Steve Hargrave. Asked whether Bond’s ‘comfy slippers’ still fit after a break of four years from the role, Craig confirmed they did, even if they are ‘a little painful’. But he also pointed out they are still his. Daniel also said Istanbul is a ‘wonderful city’ to come to.

The same report also saw some comments from Naomie Harris, who expressed some surprise at how people got to know it was a Bond movie and about where they were filming in the city. ‘There are no signs up’, she said.

A report for Sky News also carried some interesting comments from Craig. At one point, Sky quoted him as saying: ‘We’ve just tried to make the best Bond movie we can. We’re both huge Bond fans, it’s the 50th anniversary this year and that’s a little pressure, but a nice pressure to have’.

Interestingly, the Sky News report claimed that (perhaps thankfully for the production), 007 is mainly being left alone by most residents in the busy city, and most people are going about their everyday business uninterested in the Hollywood royalty currently shooting in their midst.