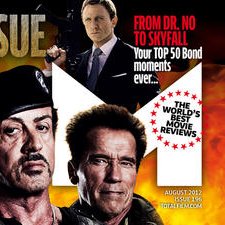 The new issue of the popular British movie magazine ‘Total Film’ has the results of a survey of the Bond franchise’s 50 greatest moments as chosen by readers.

The countdown ranges from Bond meeting Blofeld for the first time in ‘You Only Live Twice’ (1967) at no.50, through to Bond crashing his Aston Martin in ‘Casino Royale’ (2006) at no.25, with the Parkour Chase from the early scenes of the same movie coming in at no.1.

Other interesting choices emerge along the way. At no.41, for example, the magazine’s readers chose Christopher Walken’s villain Max Zorin ‘giggling maniacally’ just before he falls to his death from the Golden Gate Bridge in ‘A View To A Kill’ (1985). At no.33, readers chose the classic scene in ‘Goldeneye’ (1995) when Judi Dench’s M reads Bond the riot act in her office. Dench said of her part: ‘She adopts a tough line and he has to take it. How else would you become head of MI6?’

Interestingly, at no.29, fans chose the key moment in ‘For Your Eyes Only’ (1981) when Roger Moore’s 007 kicked a car off a cliff. Roger apparently wasn’t very keen on killing the bad guy Locque in this way, but he recalled that John Glen (the director) ‘was adamant I should show a more ruthless side to my character. Many have highlighted that scene as important in the evolution of Bond on film. Maybe I was wrong?’

At no.28, fans showed their love for the iconic scene in ‘Goldfinger’ (1964), when Desmond Llewellyn’s Q showed Bond the ejector seat in his new Aston Martin. ‘Ejector seat? You’re joking’, said Connery’s bemused 007. ‘I never joke about my work, 007’, responded Q in exasperation. Llewelyn recalled later that Guy Hamilton (the director) pointed out to him that Bond ‘doesn’t treat your gadgets with the right respect so you don’t like him at all’. Another scene from ‘Goldfinger’ made it to no.3: the now famous verbal exchange between Bond and Auric Goldfinger while 007 is strapped to a gold table facing an industrial laser. ‘Do you expect me to talk?’, asks Bond. ‘No, Mr. Bond, I expect you to die!’

As might be expected, some of the Bond franchise’s memorable and major stunts feature prominently in the top 50 moments, such as the 360 spiral jump by Bond’s AMC Hornet in ‘The Man With The Golden Gun’ (1974) at no.44, the scene where a speedboat leaps across a highway in ‘Live and Let Die’ (1973) at no.14, the incredible Bungee jump from the Contra Dam in ‘Goldeneye’ (1995) at no.5, and the famous Union Jack parachute escape by 007 which was carried out by stuntman Rick Sylvester for the pre-credits of ‘The Spy Who Loved Me’ (1977). This came in at no.4.

And, of course, with Daniel Craig’s tenure as 007 very much in people’s minds at the moment, with ‘Skyfall’ due in October, it is no surprise that the magazine’s readers placed the astonishing Parkour Chase from Craig’s first Bond movie in first place. Craig was determined to add extra authenticity to the role when the sequence was shot: ‘It was important to do as many stunts as possible. I wanted to be seen physically exerting myself’. All the indications are that he will maintain this approach in ‘Skyfall’.