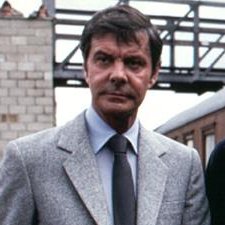 The famous French stage, film and TV actor Louis Jourdan, who very sadly died on Saturday 14 February, 2015, in California, USA, was, of course, most familiar to 007 fans as the villain Kamal Khan in Roger Moore’s sixth EON Bond movie Octopussy (1983). The JBIFC takes a brief look back at his life and career.

Born Louis Robert Gendre in France in 1921, Jourdan studied acting at the famous Ecole Dramatique and, while there, embarked on a professional acting career on the stage. At one point, his talented stage acting and apparent awareness of lighting angles came to the notice of director Marc Allegret, who approached Jourdan and invited him to work as an assistant camera operator on the movie The Curtain Rises (1938). The director then cast Jourdan in The Pirate (1939), in what would have been his first actual movie role. But the production was brought to a halt by the outbreak of war in 1939.

During the war, in Nazi-occcupied France, Jourdan spent about a year on a work gang and, when he was ordered to help make German propaganda films, he refused to do so and fled south to the French Vichy zone. Pursuing his film career again for about two years, he also became involved with the French Resistance against both the collaborationist Vichy regime and the Nazis.

After the war, Jourdan resumed his acting career with enthusiasm in France, and his first American film was The Paradise Case (1947), which starred Gregory Peck. He never looked back. Notably handsome and suave, he made his Broadway stage debut in the early 1950s in The Immoralist (1954), which also starred a very young stage actor named James Dean. During the 1950s he appeared in several major Hollywood films, including The Swan (1956), with Grace Kelly and Alec Guinness, and The Bride is Much Too Beautiful (1956), with Brigitte Bardot.

His ‘breakthrough’ film was arguably the hit movie Gigi (1958), where he played the romantic lead role of Gaston Lachaille, alongside Leslie Caron and Maurice Chevalier. This film was a box office smash and won nine Academy Awards. Similar roles followed.

However, Jourdan was also increasingly keen to break free of his typecasting as a French romantic lead, and he took a variety of roles in TV in order to subvert his Hollywood image as a stereotypical Frenchman. In the 1970s, for example, he won acclaim for his sinister and excellent Count Dracula (1977), for BBC TV. The famous shot of Jourdan as a part-human and part-bat Count, crawling slowly up the side of his castle at night, is said to have traumatized a whole generation of children!

Jourdan was also a personal friend of Roger Moore, as well as Bond producer Albert ‘Cubby’ Broccoli. Jourdan’s casting as Kamal Khan in Octopussy is said to have been similar to the reason that Topol was cast in For Your Eyes Only (1981): the story is that Cubby Broccoli attended a party given by Jourdan in Beverly Hills, and decided afterwards to suggest the French actor for the role of Khan to director John Glen.

Kamal Khan, an exiled Afghan prince living in India, was presented in the movie as a rather mysterious figure who lived in a Monsoon Palace, was involved in gambling and smuggling, and had big interests in polo, cricket and tennis, as well as game-hunting. This ‘sporting’ side to Khan was possibly a concession to Jourdan’s own real-life sporting interests, especially his personal love of croquet, tennis and swimming.

As John Glen recalled in his autobiography, For My Eyes Only in 2001, Jourdan had a suitably dark complexion for the role of the prince and ‘certainly carried the necessary authority to make an arresting villain’. On the other hand, according to Glen, there were times when Jourdan did not quite feel at home on the British Bond set, and the relaxed atmosphere and continual practical jokes during the production of Octopussy threw the French actor slightly. Glen remembered having to regularly reassure Jourdan that everyone was professional when it came to shooting a scene.

In September, 1982, when Octopussy made use of the Nene Valley Railway in Cambridgeshire, the current writer remembers vividly how Roger Moore played a number of practical jokes on set, including, at one point, walking down the platform wearing some ‘deely boppers’ on his head! Quite what the very serious Jourdan (who was also on set at the railway) made of all this is difficult to say.

Nevertheless, as John Glen acknowledged, Louis Jourdan did a very good job of the role of Khan, including delivering possibly one of the funniest lines in the movie – as 007 is clinging precariously to the outside of his Beech 18 plane, Khan orders his incredulous henchman, Gobinda (played by the excellent Indian actor Kabir Bedi) to go outside and get Bond!

Although he was up against the equally memorable General Orlov (played so powerfully by Steven Berkoff), there is no doubt that Jourdan’s Prince Kamal Khan was still able to deliver some of the best lines in the film, which he clearly delivered with relish, including ‘Mr. Bond is a rare breed. Soon to become extinct’.

Another memorable scene involved Jourdan’s Kamal Khan treating 007 to a gourmet meal at the dining table – a stuffed sheep’s head; tucking in with enthusiasm, at one point Khan plucks out the sheep’s eyeball and pops it in his mouth. The reaction of Moore’s Bond is a sight to behold! But, according to Sir Roger, in real life his friend Louis Jourdan was actually something of a food expert, who ‘loved to be in charge of catering’.

Reacting to the passing of his friend, Sir Roger said he was very sad to hear the news about Louis Jourdan, with whom he had ‘many happy memories of filming Octopussy together’.

Along with Roger Moore, Louis Jourdan was one of the stars who attended the Royal Premiere of Octopussy at the Odeon, Leicester Square, in London in 1983, which was attended by his HRH Prince Charles. This gave the press some great headlines to play with, including ‘A Prince meets a Prince’, and ‘Double-O-Princes’.