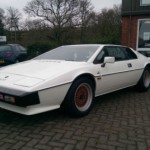 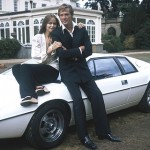 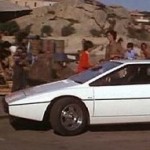 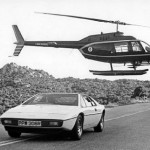 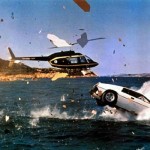 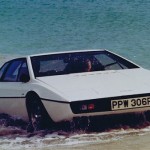 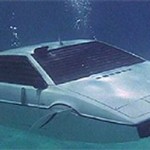 The Spy Who Loved Me

At the end of 1975, the newest design from the Lotus company was presented at the Earls Court Motor Show in London – the Esprit that had been created by Italian designer Giorgio Giugiaro. The car not only impressed the automotive world, but also producer Broccoli, who found a pre-series model directly in front of the Pinewood Studios in London. The car had been parked there by a Lotus manager. Don McLaughlan, a PR man from Lotus, had heard that the preparations had begun for a new 007 adventure, and he wanted to make the car available for the production. Experience with the vehicles from other films had shown that the publicity effect was enormous.
The works delivered two street-legal production vehicles which were only equipped with an additional piece of sheet metal beneath the radiator to protect the cars from the rough streets of the Costa Smeralda in Sardinia, where these sequences were to be filmed. Additionally, six more bodyshells were delivered, one of which was sealed for underwater scenes.

On the winding Costa Smeralda, the Lotus is chased by a black Ford Taunus and sprays cement out of four nozzles located behind the license plate in order to blind the Taunus driver. The cement, by the way, was nothing more than gray oatmeal that was squirted out of a truck that was carrying a hose device. The Taunus (which was attached to a crane in such a way that it was not visible to the camera) then flew down the embankment and landed squarely on the roof of a house. A specially installed metal slide generated the effect.

Turning the Lotus into a submarine proved to be a great deal more complicated. Since the script called for Bond’s car to be universally deployable, the decision was made to equip several vehicles with different functions. The company Perry Submarines of Florida transformed the vehicles:

Mechanics, technicians, stucco specialists, and carpenters worked with stucco and wood for about four months for the entire sequence. Two camera teams, one of which was under the leadership of underwater specialist Lamar Boren, were then involved for the same length of time. The stars, Barbara Bach and Roger Moore, never saw the Bahamas. They did their fighting in the sealed car in the diving pool on the grounds of Pinewood Studios in London.
[/fusion_text]