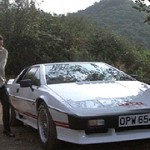 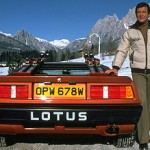 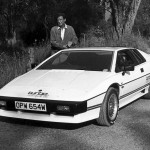 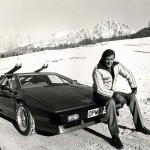 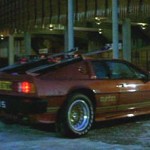 For Your Eyes Only

For Roger Moore’s fifth role, the script called for two vehicles. First, on the island of Corfu, Bond used a white Esprit Turbo. When the bad guys tried to break into it, it destroyed itself. Then, in Cortina d´Ampezzo, another Esprit Turbo, this time with a copper metallic paint, was used.

Since the two camera teams on the island of Corfu needed the car at several points of the island at the same time, two white vehicles had to be shipped there. Additionally, a chassis worth about 16,000 German marks was delivered, whereupon it was professionally blown into bits.
In January 1981, the same vehicles were waiting in Cortina d´Ampezzo. They had been repainted with the copper metallic paint. The interior trim with the top-quality, brown Connolly leather remained the same. The only change was the mounting of a roof rack for four pairs of skis. The antenna had to be taken off, since it would not have been good for the shooting, and the brake lights were disconnected – after all, James Bond never brakes, he only accelerates.
At temperatures down to 18 degrees Celsius below zero, the car was only to be seen in two short scenes: once during the arrival in Cortina in front of the Hotel Miramonti, then once in front of the ice stadium.