Looking back on Peter Hunt’s Bond 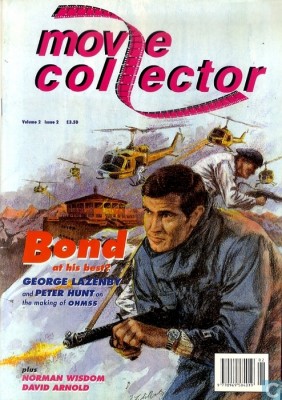 It is nearly fifty years since James Bond movie no. six, On Her Majesty’s Secret Service (OHMSS), hit the big screen and gave us, albeit briefly, a new face to 007 and possibly one of the most faithful film versions of an Ian Fleming novel until Daniel Craig’s Casino Royale.

Over the decades there have been numerous articles and documentaries made about George Lazenby’s single 007 film, but one magazine ‘special’ that remains prized among serious collectors was an issue of the sadly short-lived Movie Collector magazine.

The JBIFC takes the opportunity to look back briefly on the now sought-after ‘OHMSS‘ issue, which contained a highly detailed article on the making of the sixth 007 movie, with comments from many of the key production crew, plus views from director Peter Hunt and James Bond star Lazenby. In particular, Peter Hunt (1925-2002) offered some interesting comments on his conception of 007 and his experiences on the movie.

In March, 1995, James Bond aficionados were delighted to find that volume 2 issue no. 2 of the UK’s Movie Collector magazine was devoted to ‘The making of On Her Majesty’s Secret Service‘. Written by Philip Masheter, with additional research by Dave Norris, the magazine’s cover sported a highly attractive and exclusive piece of artwork by British artist Terence Gilbert, who had been commissioned to do the original album cover artwork for OHMSS back in 1969. He had agreed to do a brand new piece of artwork for Movie Collector.

Inside the magazine, a 14-page article, with some beautiful colour and black-and-white stills and behind-the-scenes photos, gave readers a truly fascinating look back at the movie. The magazine kick-started its coverage by noting the ‘headache’ that the EON producers, Broccoli and Saltzman, had faced after the departure of Sean Connery from the iconic role. Rightly pointing to the key contribution of Peter Hunt to the series, the magazine noted that he was the new movie’s greatest asset: Hunt was a ‘veteran of the highest calibre who was responsible for editing all the previous Bond films’, and had also undertaken second-unit work, both credited and uncredited, on a number of them.

Moreover, after the ‘outlandish gadgetry’ of Thunderball and You Only Live Twice, which had nearly dwarfed the character of Bond, Hunt was determined to return Fleming’s Bond back to his resourceful best in more believable settings. According to the magazine, Hunt’s task ‘was made easier by his good fortune to have one of Fleming’s very best novels as a starting point’. In fact, OHMSS (at least, until Craig’s Casino Royale) was the last Bond film to have any solid connection with Fleming. As Hunt commented to the magazine in 1995: ‘It’s the last one we made in that series with the concerted idea of following Fleming’s books from one to the other to the other. The only thing that happened was that You Only Live Twice should have been made after On Her Majesty’s Secret Service by the chronology of the books’. Hunt, of course, had hoped to take over from Terence Young, but the fifth 007 movie was given to Lewis Gilbert. When it came to his turn as full director, Hunt remained determined to still go for OHMSS. He added that he always knew that OHMSS ‘was a very good story’. 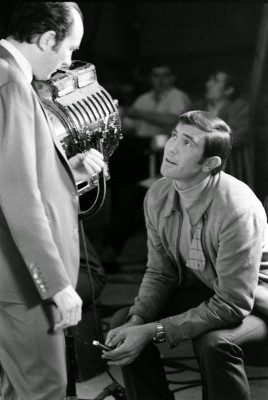 Interestingly, the magazine contained Hunt’s recollections of searching for a new actor to play Bond: ‘We had a big meeting. When you come down to deciding a new James Bond it wasn’t, at that time, just up to the producers or myself. You had United Artists involved and they had to agree it all’.

He added that it was ‘not an easy job’ to get agreement, but one thing did clearly emerge: it was agreed they wanted ‘another Sean Connery type’ in the role.

Auditions began in early 1968, with (as the magazine put it) ‘the main emphasis on finding an unknown who would have no associations with any other role’, and Hunt himself explained: ‘I tested a great many people for it. We were left with whoever was there at the time and I tested about fifty to a hundred people in various ways’. By April, 1968, there was a short-list of five possible contenders, including young Australian George Lazenby, who had become one of the UK’s most successful male models. And, as Lazenby noted, Hunt ‘was very pro-me and, in fact, without Peter Hunt I wouldn’t have been there’.

In other revealing comments made to the magazine, Hunt also reflected on the difficult position he found himself in when it came to Lazenby’s relations with Broccoli and Saltzman and whether the young star would sign a contract: ‘They wanted to put him up to a seven year contract and he didn’t want to’. Lazenby turned to Hunt for advice about the contract, but the director, mindful of his own loyalty to the producers and not wanting to take sides, said he could not really offer any advice. However, Hunt did point out to Lazenby that the most important thing he could do was to get the film ‘done properly’.

The rest, as they say, is Bond history: Lazenby completed the picture, but decided to leave the role anyway. In the meantime, Hunt helped craft a superb James Bond film, even though relations were not always great between the director and his 007 star. In fact, Hunt had managed to give the world a 007 movie which remains a firm fan favourite even today.

The OHMSS issue of Movie Collector was packed with interesting recollections from other people involved in the film, and is well worth adding to your collection if you can find a copy. 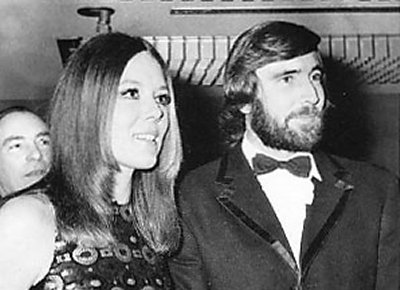 Hunt behind Diana Rigg and Lazenby at the OHMSS premiere