Looking Back on Octopussy: part 6 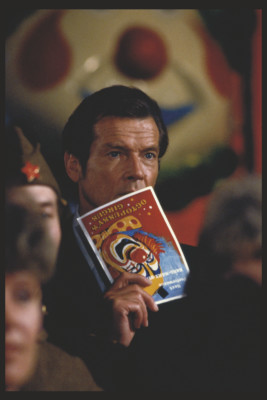 To help celebrate what is nearly 40 years since the premiere of Octopussy, Roger Moore’s sixth smash-hit adventure as Ian Fleming’s iconic secret agent James Bond, the JBIFC have in the past few weeks made available five edited extracts from an on-set report we first published in the club’s 007 magazine back in 1983.

At the time of publication, the article was the first detailed on-set report to appear from the new movie, and proved to be very popular with Bond fans in the UK and elsewhere. It was based on direct interaction with key stars from the new film and also on contacts established with embers of the production crew, including the unit publicist, Geoff Freeman, a thoroughly nice man.

Here is a sixth set of extracts, with some additional comments restored from the unedited original article.

This was the last day of filming by the Main Unit. Filming was carried out on scene nos. 748 to 756. The main priority was to get the Walter Gottell scene completed which was postponed because of the unfortunate accident on Thursday. To put Sunday into perspective, I will describe the sequence of scenes as they appeared to evolve during Thursday and Sunday.

Ferry Meadows Station (i.e. Gutenfurst in the movie) was the frontier post between East and West Germany. As the Octopussy train goes through the frontier barrier gates, the Russian General Orlov – played by Steven Berkoff – is driven at high speed to the frontier post by his aide in his Volga command car, jumps out, runs through the border guards into West German territory and runs frantically along the track in pursuit of the train. General Gogol (Walter Gottell) and his assistant arrive in a military helicopter and land near the station, jump out and run after Orlov. The border guards shout at Orlov to stop as he runs along the line and, when he ignores them, they open fire. Orlov is just reaching the back of the very last carriage of the train and trying to grab hold when bullets hit him and he falls down on to the track. Gogol runs through the frontier post, pushing the guard’s guns aside. He runs after Orlov down the track and finally reaches him, as Orlov tries to crawl along along the track. Orlov, struggling for his last breath, sees General Gogol’s face loom over him and looks up. 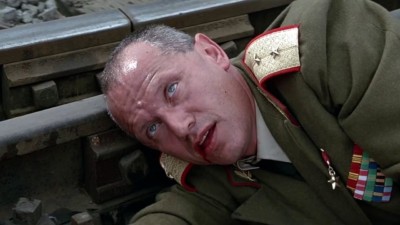 As the train disappears into the distance (with an atmospheric toot on its whistle) Gogol looks down and says something like: “You are just a common thief”. Orlov, blood running from his mouth, replies: “Yes, but tomorrow I will be a hero of the Soviet Union”. The scene went very smoothly. By mid-morning quite a crowd of local sightseers had gathered, which was inevitable (it is much nearer to Peterborough than Wansford). It struck me as a strange situation. All this filming was going on yet things around seemed to carry on as normal. On the nearby golf courses the usual early morning Sunday golfers played on, only occasionally distracted by the gunfire. A team of joggers ran by on their way through Ferry Meadows park and were diverted, to their annoyance, by a policeman into a field: “We’re not all 007s, you know”, one quipped as they ran by.

For the next scenes the Octopussy train came long the line from the station to the border post, and the camera was mounted in a red box-car at the rear end of the train. The doors at the back of the box-car were opened and, under the direction of John Glen, the camera angled downwards in order to film Orlov (Steven Berkoff) running along the rail-track, trying to grab on to the back of the train as it gathers speed. These scenes also went well. Steven Berkoff’s stunt-double (Romo Gorrarra) was also partly used for these scenes. The special effects team also had to rig up bullet hits on the track. The climax of the morning, in a sense, was the scene where General Gogol confronts the dying Orlov as he lies on the track. As he is hit by gunfire he falls over on to the track and still tries to crawl along a few feet further. Gogol stands over him, a look of sympathy but also contempt on his face, and the “common thief/hero of the Soviet Union” lines are said. The take was done a few times. The make-up expert kept the blood on Orlov’s mouth trickling on each take. 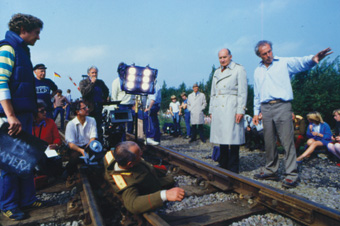 When the scene was completed there was a great sense of achievement on set. John Glen shook hands with Walter Gottell and I presumed that this was Walter’s last scene (Steven Berkoff still had more work to do the following week). Everything was loaded up by the crew and people began to leave. It was 1.15 in the afternoon and I suddenly felt sad that the main filming was over. I had seven full days involved in watching the filming and meeting and talking to people. It was one of those occasions where you want something to go on and on, and feel a bit empty when it inevitably ends. I had gained a god idea of the sequence of events in the movie as they unfold in Germany, but I also felt that I didn’t want to know every detail about the plot; it would be a let-down to know everything before seeing the actual completed film in the cinema.

On the Friday (10th September), the regional TV channel BBC-East had shown an interview with Roger Moore at Wansford and he had been especially obscure about the plot (and quite right, too!). The reporter had asked about it and Roger had said very slowly in reply: “Well… it’s about a secret agent… called James Bond… who has a double-o number, etc, etc”. He wasn’t going to give anything away and, taking into consideration that there will soon be two Bonds in the cinema next summer (Roger and Sean), I could well understand why everything is being kept a closely-guarded secret.

The week’s main unit filming at the NVR had left me with many stories and images that will remain with me for a very long time, and I would like to particularly thanks certain people who still had the time and patience to speak and pose for photos: Bob Simmons, Geoff Freeman (unit publicist), John Glen, Maud Adams, Kabir Bedi, Kristina Wayborn, the Meyer brothers, the NVR train driver, many of the local extras, some NVR workers and, of course, Roger Moore (what a gentleman!). 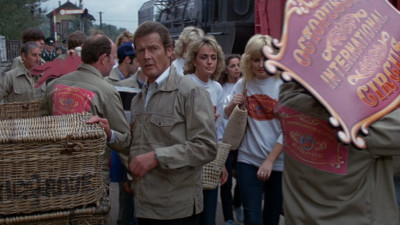