Looking Back on Octopussy: part 5 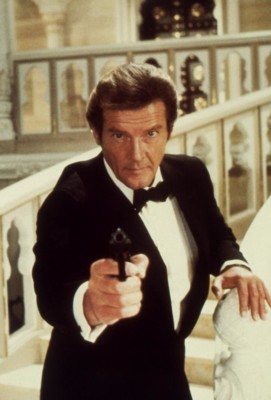 To help celebrate what is nearly 40 years since the 1983 premiere of Octopussy, Roger Moore’s sixth smash-hit adventure as Ian Fleming’s iconic creation, the JBIFC has made available in recent weeks four edited extracts from an on-set report we first published in 007 magazine back in 1983.

Here is a fifth set of extracts, with some extra comments restored from the original transcript.

For your ears only, Mr. Bond. If you work on a film production a good alarm clock is essential. It was still the first week of shooting in Peterborough. Filming started early on Saturday morning at the Nene Valley Railway (NVR), from around 6.00am onwards, with the Second Unit and members of the film’s stunt team shooting a number of complex sequences.

Then the main First Unit began their own work at around 9.00am, at the Karl-Marx-Stadt (Wansford Station) set, shooting various sequences with the main star, Roger Moore, and working through to 11.00am at the site. They then moved further up the railway line, about a quarter of a mile, and into the long, dimly-lit and dusty Yarwell tunnel, where they were to spend the rest of the day and most of the evening. 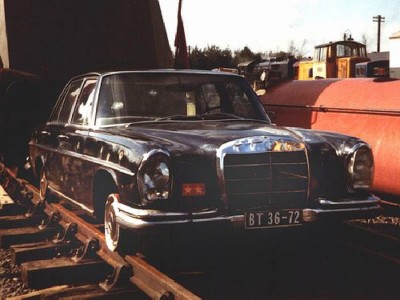 Meanwhile, back at the NVR’s main Wansford Station, the traffic was stopped from going over the railway’s level-crossing gates point, while the Second Unit were busy preparing for the next sequence, which involved a black Mercedez (doubling up as an army staff car) chasing another black Mercedez containing Bond, who escapes by driving along the railway tracks! To enable the car containing 007 (i.e his stunt double) to actually do this, it was fitted with special wheel trims so it could travel along the tracks. This had to be seen to be believed.

The photo here shows the car in storage stored at Wansford (note the ‘bullet-holes’ on its side, and two gold stars on the front. The stars had been made from thin plastic sheeting in a small room at Wansford bordering the platfrom, which had become temporary ‘workshop’).

For the sequence, the army staff car was to come to a sharp halt astride the lines at the level-crossing point, with the scene being filmed through the passenger window past both passenger (Orlov) and his driver, and through the driver’s window at the car containing Bond as Bond’s vehicle disappeared rapidly up the tracks in pursuit of the Octopussy train.

The camera crew spent some two hours or so carefully fixing struts and extension bars to the Mercedez car door on which to place the camera. During the actual filming the cameraman hung on to the camera as the car sped along and drew to a sudden halt, sitting on the level crossing. 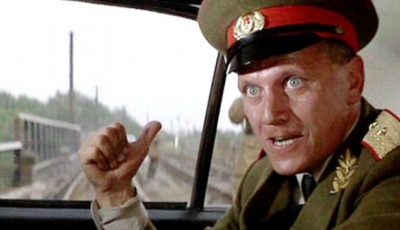 When all the preparations were complete the action began. The army staff car containing General Orlov roared up to the main level-crossing at Wansford Station and halted, commands were given (shouted!) and soldiers and officers quickly raised their weapons to fire at Bond’s car as it escaped on to the railway line and sped away, leaving trails of spectacular sparks and an ear-crunching screech (the sound of metal on metal).

The sequence was shot five times before everyone was happy. During the filming of this particular scene, Walter Gottell arrived. It was his first time back on set since having his nasty accident earlier in the week (on Thursday), although he had made a brief appearance shortly after the accident. He looked much better and back to his normal self. He was not working that day but had merely turned up to watch the filming.

Also on set was Martin Grace, Roger Moore’s stuntman and double, who has worked on the more recent Bond films. The next scene involved Mr. Grace being filmed as a double for Bond driving 007’s car along the tracks. The windscreen and the rest of the car was by now peppered with very realistic-looking bullet-holes. To actually shoot the scene, a small railway hand-car was coupled to the front of the Mercedez. On this were the camera crew. As the car moved off along the line (in the direction of the main railway bridge over the river), the crew could shoot through the windscreen of the Mercedez.

The Second Unit wrapped up at around 5.30, leaving the First Unit still working in the NVR’s Yarwell Tunnel. Generally, security around the location was pretty restrained, but no-one was allowed into the tunnel area unless they were connected with the immediate filming. This presented me with a tricky problem, as I was naturally eager to find out what was taking place in the tunnel and beyond, but all this was clearly now well out of bounds for the few curious onlookers around at Wansford Station.

The JBIFC’s president, Ross, had come up for the day from London and I had been showing him and a couple of others the locations and some of the filming. Much to their surprise, I got out my trusty O.S. map and worked out (with almost military efficiency!) how we might work our way over to the area beyond the other end of Yarwell tunnel, in order to try and see some more of the day’s filming activity. I then talked the others into joining me, so we took a complex car journey across the A1 motorway and into the countryside on the other side of the A1, parking in a local village.

Using the O.S. map and sheer determination, I then led the others across country on foot, over fences and through various farmer’s muddy ploughed fields, with the objective of re-connecting with the NVR line and the far end of Yarwell tunnel. Sure enough, after quite a steep trek, we arrived at the site, much to the surprise of a couple of people and an extra who were standing there, leaning on a fence overlooking the tunnel entrance, and peering over into the deep railway line cutting and embankment below. They were overseeing the Unit vehicles, some caravans and some generators. These were located at an area adjacent to the top of a steep wooden stairwell, which ran down into the deep embankment near the far Yarwell tunnel entrance.

Sensing that we were not there to be a nuisance, we were allowed to stay (much to my relief). And the extra, who was dressed as a Russian soldier, was quite chatty to me at times, helped by the fact that we were both from Peterborough. He was also probably relieved to talk to people because of all the boredom of having to stand around, waiting for long periods to be called down into the tunnel. 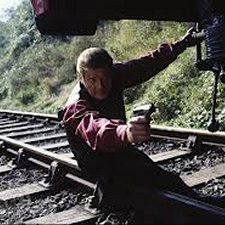 He revealed to me that he regretted not having a camera on him (the extras were not allowed to carry personal cameras), because he had been down in the tunnel at one point when Roger Moore had been catching a quick sleep in a chair, and he had seen a large butterfly land on the Bond star as he dozed. What a photo that would have made! The extra also (very helpfully!) revealed that a stuntman dressed as an officer had been filmed falling down the steep wooden stairwell, having been shot by 007.

The scenes in the tunnel apparently involved Bond leaving the train while it was in the tunnel and using the maintenance recesses for cover as he picks off the remaining guards who are following him.

At one point, members of the First Unit broke for a (very late) lunch. Everybody came up the steep wooden staircase in the embankment at the mouth of the tunnel. John Glen, Michael Wilson and Roger Moore all appeared, following each other carefully up the steep stairwell. Roger looked completely fed up, very tired and was covered in a light coating of dust and soot from head to foot. He had spent nearly three hours or so in what had become a hot, stuffy and rather airless tunnel (with lots of arc-lights), but, despite being tired and dishevelled, he was still gracious enough to sign some autographs. Although reportedly getting a large sum of money for the film, he is certainly not having an easy time. It is very hard work being 007 for the sixth time.

The filming at the site resumed about an hour later, and carried on until about 9.00pm in the evening, although Roger left earlier. The extras, who had been asked to stay ‘on call’ into the evening, were at one point handed cans of beer by Unit workers to placate them and as a sign of appreciation.

Saturday was supposed to be the last day of Main Unit location filming at Peterborough’s NVR but, while the rest of the general crew on the film had a break before going off to India, part of the Unit spent the next (Sunday) morning at the NVR shooting some of Walter Gottell’s scenes which had been cancelled the previous Thursday due to his accident.

Needless to say, I was back there, ready to lap up and witness yet more highly memorable 007 filming. 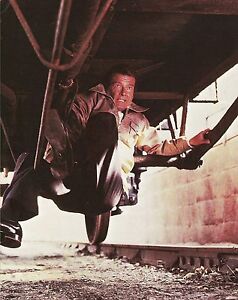 Roger Moore under the train at Wansford Station.