Looking Back on Octopussy: part 4 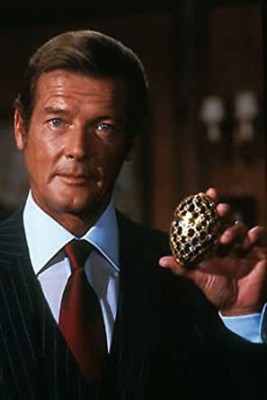 To help celebrate nearly 40 years of Octopussy, the late Roger Moore’s sixth adventure as James Bond, the JBIFC have been publishing some edited extracts from an on-set report we carried in 007 magazine back in 1983. Here is a fourth set of extracts, with some extra comments restored from the original transcript.

There was a sudden change of atmosphere on set: “124. Take One, A and B Camera, Rolling… and Action!” A Russian Volvo car was being chased by a helicopter along a stretch of the East German railway, close to the East/West border: the helicopter landed, creating a brief cloud of dust, and out jumped General Gogol and his close aid, who began to chase the renegade Russian General Orlov along the railway track as he ran across the frontier gate posts. “Cut!”

It was day number 4 in my own unforgettable encounter with 007 and the main Unit crew had switched from Wansford Station to another station, called Ferry Meadows Station, a few miles down the track towards Peterborough, located deeper in the countryside of the Ferry Meadows Leisure Park. But Ferry Meadows was now ‘Gutenfurst’, a station on the East and West German border, complete with a watch-tower, sentry post-box, barbed wire, East and West German border guards, and double railway gates. Large, quite ominous-looking warning signs announced ‘YOU ARE NOW LEAVING THE GERMAN SECTOR’ and ‘YOU ARE NOW ENTERING THE AMERICAN SECTOR’, and so on. 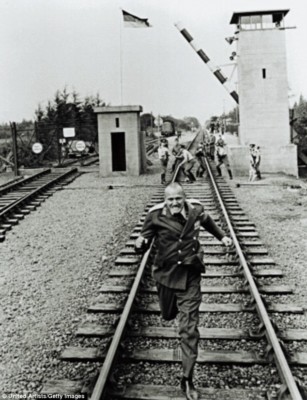 Shooting on Octopussy started early in the morning of Day 4 of the filming at the Nene Valley Railway. General Orlov (Steven Berkoff) was important here. One key scene involved Orlov’s car speeding down a narrow lane and turning into land adjacent to Ferry Meadows Station, pulling up sharply: Orlov then jumped out and ran down the rail track, in hot pursuit of the departing Octopussy train, which had just been inspected and cleared to go through the border post gates.

Meanwhile, Gogol’s helicopter would land nearby, very close to Orlov’s now stationary car. This scene was given a few takes, with the helicopter kicking up quite a bit of grit and dust when it landed. Most of the well-known people that all Bond fans would know were there: Roger Moore sharing a joke with director John Glen or with the continuity woman; Bob Simmons putting a stuntman through his paces; Cubby Broccoli, in distinctive red jumper and brown jacket, sitting back in his chair and quietly observing from the sidelines.

At another point in the day, Roger came on to the train platform and introduced his young son to various members of the crew (and public, including me). He also took the opportunity to sit at a main Unit camera and look through the lens, chatting to Glen and various other members of the crew.

In front of the cameras were, at most, maybe 7 or 8 actors, but behind all this was the main strength of any Bond film: ‘The Crew’, consisting of a number that must be close to 60 people just at that particular location alone: carpenters, electricians, gaffers, best boy, clapperboard boy, cameramen, sound man and, of course, the unflappable director, John Glen, the ultimate source of authority. Glen seemed very at home on the set, calmly sorting out the usual problems associated with the making of a major movie. As you know, making a film is a long and sometimes arduous job.

The main scene they were shooting that day was, as mentioned previously, the killing of a defector at the East German border – General Orlov. ‘Defector’ is perhaps not the right word, as he is actually trying to stop the Octopussy train. The first scene and subsequent scenes were simple to set up and very straightforward to shoot; it was just a matter of pointing the cameras in the right direction and pressing the right button (don’t think me naive about film-making: I’m not – it just seemed to me that there was little scope for any artistic accomplishment on these particular scenes). Helicopters, cars and actors came up to and went past the cameras with ease, and everything ran smoothly.

On the other hand, a film set can often be a dangerous place to work, depending on what’s being shot. On this particular day, there were two accidents: the first – a little slip by an ‘extra’ at the start of a take – didn’t look too serious but, knowing the insurance risks on film-making, the crew made sure he was quickly rushed off to the First Aid tent. The second accident was slightly more serious. Walter Gotell, known to Bond fans as General Gogol, has to try and stop the ‘defector’ from being gunned down (you’ll have to see the finished film to find out why). So, they had a couple of dry-run practices at it before the first take. On the first take, though, Walter unfortunately slipped and hit his face on the railway line. At first glance, the damage didn’t look too serious and, again, he was also quickly taken off to the First Aid tent. Later in the afternoon, however, he came back looking quite shaken. We heard that he had had five stitches put into his cheek.

At one stage, I took some lovely photos of Gotell deep in conversation with Steven Berkoff (General Orlov) as they stood waiting on the train platform, clearly using the time to talk about common interests.

A large crowd had gradually gathered around the shooting location and film camera points as the day progressed (Ferry Meadows is closer to Peterborough, so more people were tending to venture out and watch), and you could tell that the crew and the actors were getting a bit nervous at times about all the noise the onlookers were making. There were also a few hair-raising moments when one or two passers-by, coming down the lane and not realising that filming was in progress, nearly walked into the background of sequences. Film-making can be a slow and laborious business, though, and, as the day wore on, many of the public began to drift away, much to the relief of dedicated Bond fans like myself. By early evening, the light was fading fast and, as the Walter Gotell sequence needed to be shot again on another day, the crew packed everything on to the train for some of the evening and night-time shots at a more quiet and secluded location a little further down the line, involving Bond leaping off the train and having knives thrown at him. Naturally, I and a few others followed the train and crew! The scenes the First Unit shot are to be married with shots the Second Unit will shoot in a few weeks time. 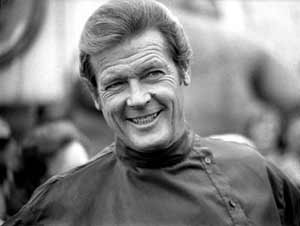 One interesting thing I found about this process concerned the mechanics of how movie-makers filmed knife-throwing scenes: you know the ones: typical scenes shown in classic films where the knife is thrown at the leading man, missing his fingers by fractions of an inch. In the case of Octopussy, the solution was simple: the knife was attached to a taut piece of wire by a crew member at the top of a wooden step-ladder, and the other end of the ‘invisible’ wire was pushed into the ground; when the pressure on the wire was released the knife could quickly slide down the wire into the ground, appearing to miss Roger Moore’s head by a whisker. Simple, but very effective. Roger, looking resplendent in a knife-thrower’s outfit (red shirt and black leather waistcoat), was very patient while all this was being set up: he listened carefully to his stunt stand-in explaining what precise positions were required, and he spent quite some time having to lie on the ground, with his head near the railway track.

Roger Moore’s stunt double was also used again for another take at the same spot: he popped up after appearing to have somersaulted from the train, only to be quickly knocked down again – another shot that will be married with the Second Unit’s scenes later. One thing I noticed, though – Roger’s double looked nothing like him! Such is the magic of the movies. I recalled a chat I’d had with Bob Simmons two days earlier at Wansford: Simmons had said to me at one point that you could train “a monkey with spats” to be a stand-in with the right know-how: the trick was precise and careful planning beforehand and getting everything just right. The camera can always fool the eye.

By now the light was growing rather thin and John Glen wanted a final shot before ending an exhausting day of shooting. Roger’s stand-in was filmed leaping down the railway embankment and into the bushes. Roger’s young son had also decided enough was enough and begged his waiting daddy (who was by then looking tired and, to me, very bored with the whole situation) to take him ‘home’. The usual autograph-hunters also pestered Roger for the now obligatory autographs, which he signed politely if a little unwillingly. A few minutes later, John Glen said in true film fashion “Let’s wrap it, that’s enough for today”.

In a strange and completely selfish way, I had not wanted the day to end, though: I’d spent another day in 007 heaven. 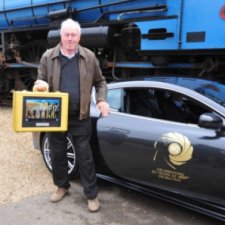 Note: The photo above shows director John Glen when he returned back to the Nene Valley Railway in September, 2012, as part of the special James Bond Blu-ray tour of Britain.