Looking Back on Octopussy: part 3 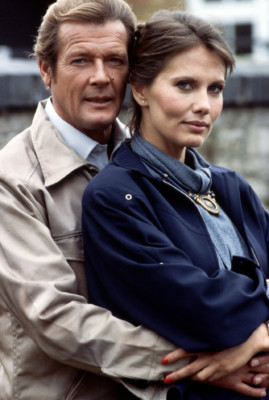 To help celebrate nearly 40 years of Octopussy, the late Roger Moore’s sixth adventure as James Bond, the JBIFC have been publishing some edited extracts from an on-set report we carried in 007 magazine back in January, 1983.

Here is a third set of extracts, with some extra comments restored from the original transcript.

James Bond, wearing an Octopussy circus jacket, walked calmly out from underneath the pedestrian railway bridge which ran over the main platforms at Karl-Marx-Stadt, with a large square wicker basket held in front of his face to hide his identity from the khaki-clad military guards. Noticing it was clear, 007 lept like a cat on to the steam-train and quickly disappeared out of sight.

“CUT”, shouted John Glen, the director of Octopussy, “Another take, back in positions everybody”. The ‘Octopussy circus’ girls, all in identical white sweat shirts with their place of employment, ‘OCTOPUSSY’S CIRCUS’, prominently displayed on them, were on the other side of the footbridge. Bond (Roger Moore) began to board and unboard the train, talking and walking before the camera. It was day no.2 of the main Unit filming at the Wansford Station site of the Nene Valley Railway. And I was there again, feeling very privileged. 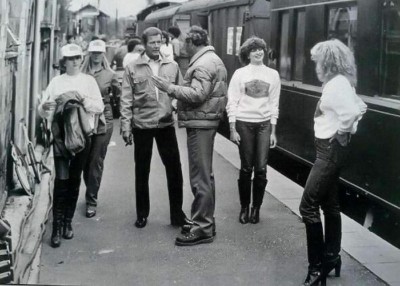 Roger Moore was dressed in a porter’s type of uniform, with the red circus emblem on the back just the same as the ‘Octopussy girls’. He began to look bored, having obviously done this small scene at least ten times. On the platform, level with the steam-engine’s passenger door, was the word ‘ROGER’ chalked on the ground so our clever agent knew where to stop, swing round and leap onto the train (a little touch of behind-the-scenes production which won’t be seen in the final film, of course).

After a few more takes, John Glen, obviously out for perfection, was satisfied. In the background, behind some trees, was a dismantled circus tent, just showing the main poles and a couple of flags, and, in the other direction, were cleverly disguised storerooms. The train station itself was notably old-fashioned and nineteenth century in design and look, and on the rail track stood two converted steam locomotives in West German disguise.

That was the morning over for cast and crew, and they all retired for dinner in the newly-erected dining room tents, laid back well out of view of the main set. The dining room area was next door to the main cast and circus personnel caravans, which in turn were located in a field, with the leading lady-villain, the beautiful Maud Adams, and Bond star Roger Moore having the largest caravans. In between takes, Roger and Cubby Broccoli (who had arrived earlier in a silver car to watch the day’s proceedings) played backgammon (yes, its true!).

While the cast involved in the morning filming were dining, a stunt scene was prepared for shooting, with Moore’s stuntman and a few of the co-stars in the background. The scene involved James Bond, as fit as ever, having to dive under a slow-moving train, to avoid being spotted by some German guards. A shortish, slightly plump man with a light brown wig was present on set. Who was he? The villain’s stand-in? No, I should have guessed: it was Roger’s stunt double for the day. The only similarity between Moore and the stuntman was the uniform and hair. Bob Simmons could easily have carried this scene off without looking any different; nobody would have been any the wiser. Such is the magic of the movies. But Simmons, as stunt co-ordinator on the movie, was still in his caravan, possibly making last-minute planning preparations for some important big scenes later on in the day.

The train was moved into position, the arc-lights were arranged to catch the action at its best, and everybody in the camera’s view was politely asked to move out of the way of the sightline of the camera. Cubby Broccoli had appeared to make sure everything was running smoothly. It was. So, obviously feeling satisfied, he decided to have a chat with the waiting technicians.

When the scene was finally ready, and cameras in position, the clapperboard came down and James Bond threw himself under the train and rolled out again in true Bond style. “Not good enough, try it again”, said John Glen. This is the difference between a low budget film and one like a James Bond movie. In a tight-budget film, one or two takes is maximum to get a scene right. On a Bond film, there’s always money available to keep production ticking over relatively smoothly. Glen, often deep in his thoughts while carefully surveying a scene, would often order a few takes before he was completely satisfied. I was full of admiration for his calm disposition on the set, which clearly rubbed off on the cast and crew and made for a generally relaxed atmosphere. 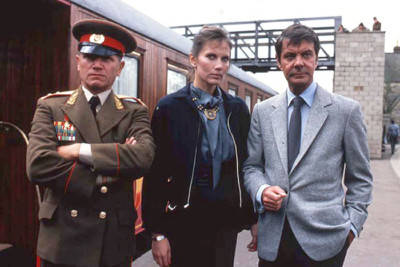 The next shot involved Orlov arriving in a car, just as Bond had dived under the train. Orlov climbed onto the platform and out stepped Louis Jordan and the ever-cool Maud Adams, the latter dressed in a navy-blue outfit and looking every inch the sultry lady villain. Meanwhile, just to give you an idea of how busy the crew was at Wansford that day, during that morning’s filming, a little further down the track, down by the river, and in a field near the rail-bridge that runs over the river, a large helicopter with Russian markings had noisily arrived. A black Mercedes (you’ll see a lot of Mercedes in this film), had had its front smashed in, then covered in river mud and water to create the illusion that it had just been dragged out of the river. In fact, that was precisely the idea. The arm of a crane attached to a train wagon was attached to the car, perched high on the bridge above the river. At one point, just after lunch, I took the opportunity to go down and inspect the helicopter at close quarters (the crew had temporarily disappeared) and grab a few photos.

In the afternoon, the main filming activities then switched to this particular location. At one point, also just after lunch, Roger Moore, looking tanned and relaxed, and wearing a red and white sports jacket, slowly wandered down the path that runs next to the rail-line, generously signing a few autographs along the way, and sending people’s cameras into overdrive. Although not directly involved, he had come out to have a look at the scene. At one stage, he went down the steep steps that run from the rail bridge down to the riverside embankment, and chatted to crew members as they prepared the location.

At around two o’clock, the main production crew arrived at this particular spot, with some stand-ins playing East German guards, along with a group of fishermen (locals recruited from Peterborough) who have just ‘encountered’ the car. A little while after that, some scenes were shot involving the helicopter landing on the riverside embankment, while our good friend General Gogol (Walter Gotell) arrived, with a young KGB officer by his side (a local Peterborian). I spied Michael G. Wilson, his box camera in hand, looking on with interest at the goings-on. The increased involvement of Michael Wilson in the film series’ scripting and production is still yet to be seen, but if his intense interest is as strong as it looks, then one can only be pleased.

When the scene was all set and ready, the director gave the order and the helicopter rotor blades whirred into motion, a ear-splitting noise which truely branded itself into my brain! All the people not involved in the scene were moved, leaving about six guards located on the ground as the smashed Mercedes swung around in the air at the end of the crane’s arm. The order was then given to stop the helicopter blades, making it look as if the General and his officer had just arrived in it and landed.

The cameras began to roll. The smashed Mercedes had been lowered by the crane onto the ground, with the guards strategically located in a circle a few feet away from the car, surrounding the immediate area. The General and his sidekick walked sternly from the helicopter towards the senior military guard, and asked him what was in the car. The General then opened the boot of the smashed car, and hauled out a large box, which was then opened, revealing what looked like valuable jewels, probably a stash of Kremlin jewels. The General then said something to the guard, who reacted, barking out orders to his men, as the General and the other KGB man walked urgently back towards the waiting helicopter, with a serious message on the walkie-talkie: “Find Orlov!”

It actually took almost six takes for the senior guard to get the message right at the end of that scene. Directors are never satisfied!

For me, the day had been an absolute joy. I had met and spoken to various members of the cast and crew, including Maud Adams, Kristina Wayborn, Kabir Bedi, the Meyer brothers, John Glen, Unit Publicist Geoff Freeman and (for me a particular highlight) legendary stuntman Bob Simmons, who was very generous with his time. Moreover, I witnessed, at first hand, another day of 007 shooting, with so  many images and memories absorbed and too numerous to describe. It had been another unique experience, one I shall not easily forget. 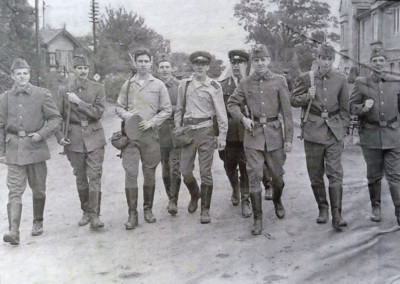