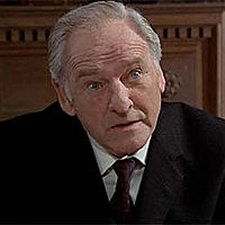 While trawling through the JBIFC’s archives, a short interview with the original screen ‘M’, Bernard Lee, conducted by the Club in 1980, re-emerged, in which he provides some background to his acting career and some brief thoughts on the Bond franchise.

With the recent demise of Bond’s boss ‘M’ in the climax to Skyfall, there is now great interest in how Ralph Fiennes will play the character in Bond 24, compared to his predecessor Judi Dench. In the eyes of some Bond scholars, Bernard Lee (1908-1981), made his interpretation of  007’s boss very faithful to the original Ian Fleming novels. In all, he played ‘M’ in eleven James Bond films.

Back in 1980, John Bernard Lee (his full name) very kindly gave a brief interview to the JBIFC, not long after the release of Moonraker. Little did we know it at the time, but Bernard was experiencing serious health problems, and sadly died in January, 1981. Filming had already started on For Your Eyes Only, but Bernard passed away before his traditional scenes as ‘M’ could be filmed. As a tribute to the actor, the film-makers decided to leave the character out of the script and just say he was ‘on leave’. As Bond fans know, Robert Brown became the new ‘M’ in the following Bond movie Octopussy. The following extracts from the interview first appeared in the Club’s 007 newsletter (no.5, August, 1980), and we thought a new generation of fans might enjoy reading them.

Fan Club: How did you come to be an actor?

Bernard Lee: Well, firstly, I wanted to become a professional footballer! I went to school in Southampton. I played centre-half for the Corinthians (an amateur side) until I was 17. I never did homework at school, spending most of my time at Southampton Hippodrome. I came to discover the Royal Academy of Dramatic Arts (they call it RADA now – don’t get it mixed up with DECCA). I saved the money and did an audition and was accepted. While I was there I read The Stage and answered an advert for an audition for Edgar Wallace’s play The Ringer and, funnily enough, I got the job – my first. I may add en passant, that I also did a commercial in Auberley Street with a now international star – Rex Harrison. We got £2.10 each! I was taught by Claude Rains for two months and he told me “you’ll be a good actor one day, Lee”. I took that as a great compliment from a man I deeply respected. I then appeared in American films with Humphrey Bogart, Gina Lollobrigida, Jennifer Jones, Peter Lorre… you name them, they were all there. Walter Huston offered me a starring role which I refused because I felt lost in America, somewhat frightened.

FC: How did you become involved in the Bond films?

BL: Well, I knew Cubby, having worked with him previously in Father Brown and Fire Down Below (with Rita Hayworth, Robert Mitchum, Jack Lemon and Herbert Lom) and when casting for Dr. No he must have thought of me. Cubby loves the Bond films, he loves actors. He is a wonderful person. Myself, I’d never read a Bond book.

FC: Did you ever imagine the Bonds would be a run-away success in 1962?

BL: No way. But the future of the series depended on the success of that project.

FC: Do people recognise you in the street?

BL: People do come up to me and ask me for my autograph – and most people enjoy signing autographs and they enjoy asking questions about Sean Connery and Roger Moore. I say they’re different. Sean is a very dour Scot – he’s very private. I remember when his brother Neil made Operation Kid Brother, Sean was furious. Funnily enough, when Sean was asked in a radio interview what part of a Bond film he most enjoyed acting in, he said “the scenes with Bernard Lee because I don’t have to worry about the acting”. I suppose because he doesn’t have little girls stifling him or gadgets flying around him!

Both Bernard Lee and Louis Maxwell (Miss Moneypenny) took roles in Operation Kid Brother (1967), an Italian movie which sought to cash in on the spy movie craze of the 1960s. The film was also released in Europe under the titles O.K. Connery and even Secret Agent 00. In fact, the film not only had Sean Connery’s brother Neil (a plasterer from Edinburgh) in the starring role, but also had parts for a number of other familiar Bond movie faces: Anthony Dawson, Daniela Bianchi, and Adolfo Celi. Sean was not best pleased. Louis Maxwell later claimed that she and Bernard Lee only took the roles because she and Lee were paid more money for their roles in the movie than for their respective roles as Moneypenny and ‘M’ in the Bond series.