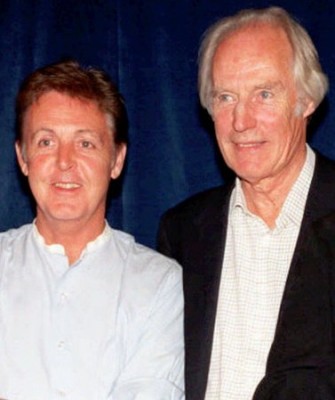 The JBIFC were very sad to learn of the death, at the age of 90, of the distinguished music producer and composer Sir George Martin, who was often known as the ‘Fifth’ Beatle. Sir George passed away on Tuesday, 8th March. The former Beatles drummer Ringo Starr broke the news on Twitter and led the many tributes. Sir George’s family thanked ‘everyone for their thoughts, prayers and messages of support’ after his death was announced.

In an amazing career that spanned seven decades in the music industry, not only did George Martin sign the Beatles (four working-class lads from Liverpool, who became one of the biggest bands of the 1960s), but he also produced more than 700 records, many of them smash-hits. As head of the Parlophone record label in the early 1960s, George had heard a demo tape by the Beatles and, while he felt they still needed to work on their music-playing skills, he was won over by their great sense of humour and their evident determination to make it big. He also felt, instinctively, that the four young guys showed huge potential, given the right guidance. In hindsight, he was absolutely right.

During his career, Sir George won multiple Grammy awards and also an Academy Award for the score to A Hard Day’s Night. He also played an important part in the evolution of the James Bond film franchise, helping to ease its passage from the 1960s to the 1970s: when Paul McCartney and his band ‘Wings’ were given the job of singing the main theme song to Roger Moore’s debut Bond movie Live and Let Die (1973), Paul requested that the 007 producers allow George Martin to also work on and arrange the main song.  Although there were some reservations about the choice of singers expressed by Harry Saltzman, George Martin (a well-spoken former Naval serviceman) was apparently instrumental in persuading the Bond producer that Paul McCartney’s group were more than suited to the task.

In fact, when both of the Bond producers heard and saw the work that George had carried out on the main song, they were so impressed that they decided to ask him to compose the music for the whole movie. Martin scored the soundtrack to Moore’s first Bond movie by working very closely with the director Guy Hamilton, who carefully explained what he wanted for each scene in the movie. The soundtrack, which included a suitably revamped 1970s version of Monty Norman’s classic James Bond theme, combined some traditional ‘Bondian’ elements with a refreshingly new approach, all of which helped to capture the new face of Bond and the atmosphere of the new decade.

On hearing of Sir George’s passing, Sir Roger Moore commented: ‘How sad to wake to the news Sir George Martin has left us. He made my first Bond film sound brilliant!’