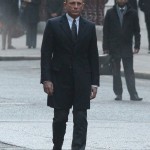 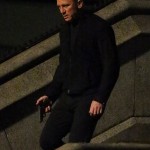 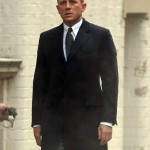 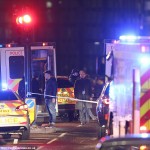 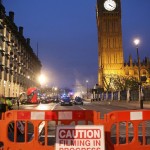 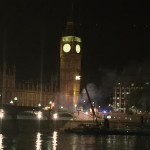 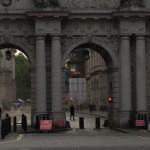 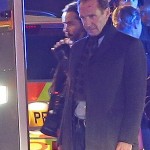 The name’s Ben, Big Ben. The latest round of SPECTRE location filming, which took place over two nights of the late May Bank Holiday weekend in central London, saw some key action scenes being filmed on and around Westminster Bridge, very close to the famous clock-tower of Big Ben and the equally iconic Houses of Parliament buildings. The filming involved Ralph Fiennes, Naomie Harris and – on the second day – 007 star Daniel Craig.

The fresh round of London filming was carried out during the late evenings and early hours of Saturday May 23 to Sunday May 24, and Sunday 24 to Monday 25. The daylight hours of Sunday afternoon also saw some footage shot with Craig in the nearby Whitehall area, near the real-life Ministry of Defence, based upon some scenes which come earlier in the movie.

The JBIFC had a spy operating in the River Thames and Westminster vicinity over the weekend, and he has just filed the following briefing for your eyes only.

Following the location filming on the Thames with a speed-boat and helicopter carried out the previous weekend (on Sunday May 17), the SPECTRE production crew returned to the same area over the Bank Holiday weekend, but this time Westminster Bridge itself very much became the focus of attention and activity for the film-makers.

During the course of Saturday, interested onlookers were able to see where vehicles intended for the night’s action were being stored, including in Belvedere Road, near the Shell Centre, where various vehicles were parked, and also quite close to the British Film Institute (BFI) area of the embankment, where there was a line-up of vehicles, including Fire Engines, three Range Rover Discovery Sports (in gun-metal grey colour), and some police cars.

Similarly, the hours of Saturday afternoon and into the evening saw the beginnings of careful preparations along the embankment areas of the River Thames on both sides of Westminster Bridge, with generators, electrical cables, lighting fixtures and powerful spotlights uncovered, checked, adjusted or put in a new position by lighting technicians, working under the direction of the Gaffer (Chief Lighting Technician). Some of this equipment was already in place, having been utilised for the previous weekend’s filming (in fact, some of the spotlight fixtures on buildings had been deftly put in place quite a few weeks ago). Each key piece of equipment was also kept under the watch of security personnel in high-vis jackets (imagine the long hours of tedium they have to endure!).

From around 9.00pm onwards, as the light of the Saturday evening slowly faded into night-time, further signs of activity could be seen on the River Thames itself, close to Westminster Bridge and on the County Hall side, when two large barges sitting in the Thames began to lift their long crane-arms into the air and position spotlights very high up and overlooking the Bridge.

One of the pavement sides of Westminster Bridge (the side closest to the Houses of Parliament) was then also closed to pedestrians, and a small convoy of crew self-drive hire vans and lorries, together with three Fire Engine vehicles, also took up positions on that same side.

Meanwhile, on the embankment walkway near County Hall hotel, film crew personnel also took up position guarding the pier entrance located at the famous London Eye, occasionally allowing film crew members through the entrance and down the pier walkway to some smaller boats on the Thames. To the side of County Hall, next to Jubilee Gardens and not far from where crew equipment vans were parked in Chicheley Street, two large and very powerful white-light spotlights were turned on and beamed straight on to the London Eye itself, creating some long eery shadows at ground-level on the paving, but making the Eye look even more spectacular from the other (Victoria Embankment) side of the Thames.

A source told the JBIFC that, despite previous announcements, there was going to be some brief use of a helicopter that evening, but in a quieter and more low-key way (the agreed time allowed for helicopter usage the previous Sunday had been up to 11.59pm only, but this time round the location office had managed to secure some time for early hours usage).

Although signs placed at both ends of the Bridge had announced that the Bridge itself would be closed to traffic and the public from 11.00pm onwards, the Bridge was not actually closed until well after midnight. Indeed, after much preparation and waiting, with camera angles being set up and so on, filming eventually got under way in the early hours of Sunday morning. The few curious onlookers still waiting in the area were – unsurprisingly – pushed right back, while scenes were shot close to, and actually on, the Bridge itself, including with Ralph Fiennes and Naomi Harris. These scenes will be intermixed with footage that has been shot at Pinewood over recent days. Interestingly, a rather bruised-looking Mr. Fiennes was seen sporting a couple of (false!) gashes on his head, and at one point, he was filmed walking alone on to the Bridge.

A helicopter was also briefly used for a few minutes during the filming. In addition, after the Bridge had been sprayed by the Fire Tenders to give the road and pavements the required ‘wet’ look, some police vehicles were seen speeding towards the Bridge. Between 3.00am and 4.20am, the few sturdy onlookers who were still around were treated to something even more memorable: the visual effects team staged a simulation ‘fire’ at the Big Ben section of the Bridge, pumping quite a lot of smoke across the Bridge, which rose high into the sky. It was certainly a scene to remember, as Big Ben remains brightly lit throughout the night. One suspects that any MPs working late into the early hours at the nearby Portcullis House office block must have been given an excellent view of the filming activities.

During the afternoon of Sunday, May 24, 007 himself – Daniel Craig – caused a huge surprise to passing pedestrians when the SPECTRE crew shot some scenes in and around the nearby Whitehall area, including outside a building in Whitehall Road. Craig looked notably smart in dark jacket and tie, as some footage was shot which is apparently connected to some earlier scenes in the movie’s plotline.

Meanwhile, during the course of the day and into the remaining daylight hours of the evening, preparations got underway again along the River Thames embankment and near Westminster Bridge, with some busy activity in evidence regarding lighting rigs and potential camera angles. In particular, some powerful spotlights had been positioned next to the wall and pathway which runs along the embankment and up to the steps which lead onto the southern end of the Bridge itself, next to the St. Thomas’s Hospital side of Westminster Bridge and the river. This is the spot where a wooden gift stall has been located for many years, selling London souvenirs to passing tourists during daylight hours.

In contrast to Saturday evening, the after-dark shooting on Sunday commenced earlier, around mid-night. There also appeared to be quite a few more curious onlookers compared to the previous evening, and – again – crew security personnel had to push people right back, and also issue requests that ‘flash’ photography not be used during the filming. As the night turned into the early hours of Monday, many of these people drifted off, leaving a few hardy Bond aficionados to watch events as they unfolded (again, a saviour for this author was a 24-hour ‘food and wine’ store near County Hall, which offered valuable supplies and hot drinks!).

As with the previous evening’s filming, the shooting included the staging of a simulation ‘fire’ once again near the Big Ben end of the Bridge, together with some big plumes of rising smoke. But the highlight of the Sunday night shooting was undoubtedly the re-appearance of Craig, this time kitted out in the zip-top dark top he had worn in the speed-boat the previous weekend.

What came across once again to this author is the patient planning and sheer hard work that has to go into what will only be a few seconds on the big screen. Needless, to say, Craig took it all in his stride: it was just another night’s work for Britain’s most effective double-O section agent.

During publicity for his one-off time as 007 for On Her Majesty’s Secret Service, some now famous photos were taken of George Lazenby standing on a wall and posing with his gun next to one of the famous lamp-posts that adorn the embankment wall at the southern end of Westminster Bridge (with Big Ben and the Houses of Parliament visible across the river in the distant background).

And, just a stone’s throw from where Craig was filming at the same southern end of the Bridge on Sunday night, Pierce Brosnan’s 007 was filmed walking down a few steps just on the opposite side of the same end of the Bridge for Die Another Day: the secret wooden door entrance to ‘Vauxhall Cross’, which Bond opens with a key in the 2002 movie, was actually located under the distinctive Lion statue on the County Hall side of the Bridge.

At the time, the small wooden entrance in real life was merely a door to a small office used by a security firm, whose personnel later became bemused at the number of tourists who would often stop and take photos of the door!