Licence to Thrill: Creating ‘For Your Eyes Only’ 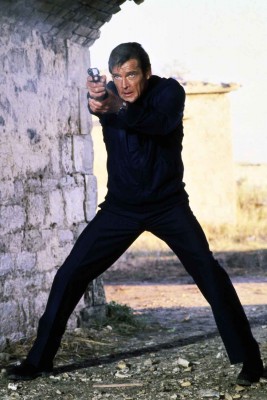 It was really great to see For Your Eyes Only back on the big screen alongside The Spy Who Loved Me, as part of a very fitting tribute to the late Sir Roger Moore.

In many ways, For Your Eyes Only gave us a glimpse of a more serious version of Roger Moore’s 007, and was conceived by the writers as an attempt to return back to the Bond formula of the 1960s, with fewer tongue-in-cheek moments and some genuine tension.

The JBIFC takes the opportunity to take a brief look back at the creation of the film, which was very different in tone from the spectacular sets and larger-than-life villians that we had seen in the previous two Bond movies, The Spy Who Loved Me and Moonraker.

For quite some time after the completion of Moonraker (1979), there were serious doubts over whether Roger Moore would actually continue as 007, and Roger himself had expressed some open reservations in interviews. While negotiations continued, Cubby Broccoli and first-time director John Glen were, in the meantime, forced to have a ‘Plan B’ in place just in case negotiations with Roger’s agent fell through. Their list of possible replacement Bonds included James Brolin, Lambert Wilson, and Timothy Dalton, while the main studios were pressing for rising Australian star Mel Gibson to be considered. A strong candidate was Michael Jayston (who, ironically, did go on to play Bond later in his career in a BBC Radio version of You Only Live Twice in 1990). In the event, much to everyone’s relief, a deal was finally agreed with Roger Moore at the very last minute.

The initial question mark over Roger’s participation in FYEO was also one of the reasons why the pre-credits to the movie featured James Bond visiting his late wife Tracy’s graveside: it was felt that, had there been a new James Bond actor, this scene would have provided an immediate continuity link for the audience. It was also possibly one of the reasons why an (un-named) Ernst Stavro Blofeld appeared in the pre-credits (played by John Hollis, and voiced by the distinctive tones of Robert Rietti), a scene that was shot at Becton Gas Works in East London. This sequence also included, of course, some astonishing stunt work by Roger’s stunt double the late Martin Grace, involving Martin clinging to the side of a helicopter flying high over the River Thames and also directly into buildings at the Gas Works.

The basic storyline to For Your Eyes Only was penned by Bond screen-writing veteran Richard Maibaum with the invaluable help of Michael G. Wilson. It was based on two Ian Fleming short stories, For Your Eyes Only and Risico. A shark keel-hauling scene from Fleming’s novel Live and Let Die was also worked into the screenplay, furnishing the plot with one of the most dramatic sequences in the movie. 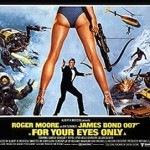 After the space-based themes of Moonraker had pushed the very boundaries of Bond’s world as far as they could possibly go, Broccoli and the FYEO writers felt that Bond needed to come back down to earth (so to speak), with a more authentic and grittier plot. As John Glen later recalled: ‘We had gone as far as we could… We needed a change of some sort, back to the grass-roots of Bond’. Thus, when British spy ship St. Georges, using the Automatic Targeting Attack Communicator (ATAC), is sunk accidentally by a WWII mine off the coast of Albania, agent 007 races against time to stop the ATAC falling into the hands of Russian agents. In many ways, this story theme was arguably a deliberate attempt to inject some of the authenticity of the earlier Bond movies into the plotline, and perhaps also restore a more ‘Fleming’ feel to the character of James Bond. Similarly, the fact that 007 is given specific instructions with a MI6 file by Bill Tanner (James Villiers) was also a nice nod back to the days of the Connery era. The plotline also reminded audiences that James Bond has a licence to kill, which sometimes involves assassination.

Indeed, what is so different to FYEO is that director John Glen, who had been awarded the full director’s role by Cubby Broccoli after some years of loyal service to the Bond team (as both an editor and second unit director), was able to draw out a suitably serious side to Roger Moore’s performance as 007, and many 007 fans rate this as one of his best performances as the MI6 agent.

Another key conceptual strength to FYEO were the villains. Both Aris Kristatos (played by Julian Glover) and Milos Columbo (played by Topol) were very down-to-earth and believable as characters. And, in a nice plot twist for audiences, Columbo actually turned out to be an ally of 007. Moreover, the silent but deadly hit-man Emile Leopold Locque (played in suitably sinister fashion by Michael Gothard), through his ruthless murder of both Ferrara and Countess Lisl, gave Roger Moore’s 007 very good reason to kick Locque’s car over the edge of a cliff. Again, although Roger himself was uncomfortable with this sequence, this was clearly an attempt by the writers to restore some Fleming-esque ruthlessness back to the series, something audiences would not really see again until the Timothy Dalton films.

All in all, although there were still many familiar Moore-era aspects to the film, the writers on FYEO more than succeeded in giving us a very different version of a Roger Moore Bond movie. 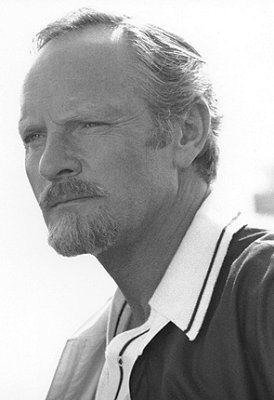