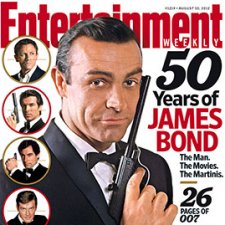 The new edition of the American showbiz magazine ‘Entertainment Weekly’ (EW) is a special issue devoted to 50 years of James Bond.

Bonds both past and present feature in the new issue of EW, which hit newstands in the USA on August 3rd. The popular magazine carries a photo of Sean Connery as 007 as the main image on the front cover, together with smaller photos of the five other actors who have played Bond in the official EON franchise. The introductory essay is by EW’s Bond devotee Ben Svetkey.

In fact, there are no less than 26 pages dedicated to our favourite secret agent, and these include a set of behind-the-scenes photos (annotated by Bond producers Barbara Broccoli and Michael G. Wilson), together with a guide to all 22 Bond movies, and a round-up of 007’s greatest gadgets.

The special issue also has a map revealing every place James Bond has visited around the globe, a special interview with one-time Bond George Lazenby, and some reflections on ‘Skyfall’ from director Sam Mendes. At one point, Lazenby comments: ‘They offered me millions under the table to do another one, but I thought James Bond was over’.

For those of you who wish to avoid small spoilers, look away now.

Surprisingly, Michael G. Wilson reveals in the magazine that Javier Bardem’s villain, Silva, ‘knows a bit about M’, and ‘is involved in a revenge’, while Barbara Broccoli says that Albert Finney plays a ‘mysterious figure’ from Bond’s past.