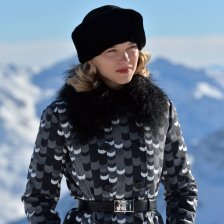 Gorgeous French actress Lea Seydoux, who has the major role of Madeleine Swann in the next James Bond adventure SPECTRE, gave a detailed interview to a British newspaper recently, and set out some of the background to how she was selected for the role by Sam Mendes, and what the audience can expect from her character Dr. Swann.

As Dr. Madeleine Swann, Lea becomes the tenth French actress to play a Bond girl in the iconic EON spy series. Speaking to the ‘Event’ supplement of the UK’s Mail on Sunday newspaper, the 29-year old award-winning Parisian actress revealed that she had a bit of a crisis of confidence as soon as she landed the role of Swann.

Seydoux explained: ‘I started to wonder whether I had it in me to be a Bond girl. I wondered whether I was beautiful enough. So there was some anxiety about it. I got the part in April, 2014, and filming didn’t start until December, and so maybe I had too much time to think about it’.

Reflecting on the actual process of her selection, Seydoux said: ‘The first audition took place at a hotel in Paris. I joined the three other contenders in line. We were there to read lines from Casino Royale and Quantum of Solace. I arrived very early and I was nervous so I drank a little beer to relax myself. When it was my turn for the audition, my face was bright red and I forgot my lines. It wasn’t a success. In fact it was a failure. That made me very sad but I asked if I could audition a second time’.

She continued: ‘After that, they asked if I could meet Sam Mendes at his office in London. I think he really liked me. He said he’d think about it. I waited for a few months. Then, in April, 2014, I had lunch with Sam in London. He told me I was part of the film’.

From Paris With Love

Although Seydoux has been something of a household name in France and has built up enormous respect for her roles in serious art-house movies, she has remained a relative unknown in the UK and USA. While she did have roles in major Hollywood movies such as Inglorious Basterds (2009), Robin Hood (2010), Midnight in Paris (2011) and Mission Impossible 4: Ghost Protocol (2011), her best work arguably remained her critically-acclaimed roles in French-language movies. In 2013, she received rave reviews and was awarded the Palme d’Or prize (the Festival’s highest honour) at the Cannes Film Festival for her ground-breaking role in Blue is the Warmest Colour (2013).

In one sense, Ms. Seydoux has already worked with one of the Bond ‘team’: she had a role in The Grand Budapest Hotel (2014), which starred Ralph Fiennes (who took over as ‘M’ in Skyfall and is reprising the role in SPECTRE). However, Seydoux’s relative unfamiliarity to non-French audiences is about to change, and in a very dramatic way. The SPECTRE role will elevate her to near-global status.

Describing her Bond role to the Mail, the French actress said that Madeleine Swann is ‘very chic, far more chic than I am in real life. She has the power to change Bond’s life’.

Interestingly, Seydoux also revealed: ‘Her name is, of course, a nod to Marcel Proust. In Proust’s Swann’s Way, the opening book of Remembrance of Things Past, the madeleine sponge cake has the potential to evoke powerful memories. The name has been chosen deliberately for this film. Madeleine Swann is a catalyst for change. She helps Bond open the mystery so it is revealed’.

Significantly, in a special profile of Lea Seydoux for the new edition of the UK’s Empire film magazine (April, 2015), this hint at the precise role Swann will have in James Bond’s life is given some further intriguing detail.

Seydoux explained to Empire that Dr. Swann won’t be throwing herself at 007 at the first chance she gets: ‘He can’t really have her. She’s not seduced at first sight, and she doesn’t fall for his tricks. She resists. She’s his equal, independent and strong and smart, and she doesn’t need him or wait for him to save her’.

Seydoux emphasised that Swann is resourceful, but not in a physical kick-ass kind of way: ‘She’s not a fighter, she’s a doctor. She fights in another way’.

In terms of the production of SPECTRE so far, much of Seydoux’s work has been carried out at Pinewood Studios near London, but she was also involved in some key sequences shot on location in the Austrian Alps in January.