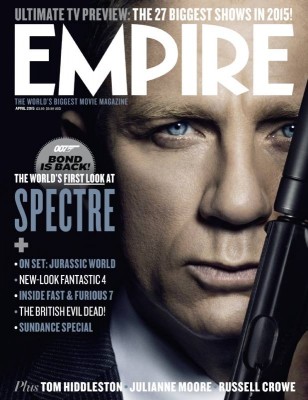 The new issue of the best-selling British movie magazine Empire (April, 2015), which has just hit retail outlets in the UK and USA, offers a special preview and articles on the new James Bond adventure SPECTRE, together with an eye-catching Daniel Craig front cover.

The magazine offers readers 14 pages of both SPECTRE and general Bond-related material, including a ‘first look’ still of director Sam Mendes in conversation with Lea Seydoux on the set at Pinewood and our first glimpse of the menacing-looking henchman ‘Mr. Hinx’ (played by Dave Bautista) in action in Austria.

The magazine was invited to the SPECTRE set at Pinewood studios in late January and its reporters were able to walk through the soundstage containing the large panoramic backdrop to the Austrian Alps and visit the ‘Hoffler Klinik’, a spa hotel reserved for the seriously rich. The Empire journalists were also able to see a special Consultation Room, described as a large glass-and-chrome office, which will apparently be home to Dr. Madeleine Swann (played by Lea Seydoux).

According to Empire, director Sam Mendes remains determined to continue to push the ‘old-school’ Bond feel he brought so successfully to Skyfall. Barbara Broccoli commented: ‘Everybody seemed to love Skyfall, and that’s what we’re going for. We want to make a movie that people love, like they loved Skyfall‘.

The magazine’s coverage also offers readers some further tantalising clues about the plot of the new 007 adventure. At one point, Broccoli’s co-producer Michael G. Wilson explains that Dave Bautista’s character Mr. Hinx is ‘an assassin… one of SPECTRE’s top guys’, while Empire was also able to catch a glimpse of a stunning Italian chamber on the Pinewood set that will apparently be the scene of a top-level meeting of SPECTRE.

Picking up on this core theme, Barbara Broccoli said: ‘SPECTRE has, in the whole history of Bond, played an important role. We thought, “Okay, now’s the time to explore that again in a new and exciting and different way. We wouldn’t be attempting to go there unless we knew we had a good way of doing it”‘. On the other hand, she would not be drawn on the precise role of the character Oberhauser (played by Christoph Waltz), and whether there was any truth to rumours that he would be Ernst Stavro Blofeld (which he has firmly denied). Broccoli said: ‘We have SPECTRE and the rest is speculation’.

The new issue of Empire also has profiles of Lea Seydoux and Monica Bellucci, and also some coverage of the other members of the double-O section mentioned during the history of the Bond film franchise.