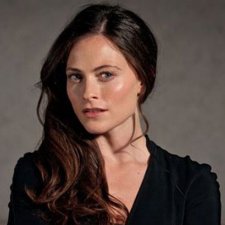 The actress Lara Pulver has been cast as Ann, the wife of Ian Fleming, in the new biopic being made about the 007 author’s life starring Dominic Cooper as the creator of James Bond.

In some new details carried by three British newspapers on January 25 (The Independent, the Daily Mail and the London Evening Standard), it has been confirmed that 32-year old Pulver will star opposite Dominic Cooper, who is portraying Ian Fleming in the new four-part drama, which is entitled Fleming. The drama is being made by Ecosse Films and directed by Mat Whitecross. Ann, who was married to the owner of the Daily Mail, Lord Rothermere, became involved in a passionate love affair with Ian Fleming, and later became Fleming’s wife for twelve years until the Bond author’s death in 1964.

Lara Pulver is best known for her TV roles in the BBC’s spy series Spooks  (known as MI5 in America) and also for a controversial nude role in an episode of the BBC’s acclaimed Sherlock detective series. The Evening Standard quoted Pulver as saying of her new role: ‘I am thrilled to be playing Ann, a real life high society siren worthy of Fleming’s finest fictional femme fatales‘. She added: ‘In extraordinary times Ann had the ear of politicians as powerful as Churchill and counted artists like Lucien Freud among her friends, yet was consumed by a torrid romance with the great Ian Fleming – a twisted and passionate love that would last the rest of their lives’. The Standard also revealed that Rupert Evans will play Ian Fleming’s brother, Peter.

Similarly, Baz Bamigboye, in his showbiz column in the Daily Mail, also gave UK readers some details about the new TV series and the latest casting decisions, including some information about the various female roles.  Apart from Lara Pulver, the actresses Annabelle Wallis, Anna Chancellor and Lesley Manville will play the key women who influenced the Bond author in his life.

Award-winning Manville will portray Fleming’s indomitable mother, Evelyn (who Fleming used to call ‘M’). Wallis will portray an early love of Fleming, Muriel Wright, who was killed during the London Blitz. And Chancellor has been cast as the fictional Lieutenant Monday, who, in the new drama, will be portrayed as the blueprint for Miss Moneypenny.

Executive Producer Douglas Rae, the head of Ecosse Films, told the Mail: ‘Muriel was his great love. She was beautiful, and if anyone was a Bond girl it was Muriel. But she was killed during a bombing raid in the war’. Fleming had first met Muriel on a skiing trip in 1935, but found it difficult to remain loyal. Some biographers of Fleming have argued that, after she died so tragically, he bitterly regretted the way he had treated her.

According to the Mail, in another piece of casting news, Fleming’s boss Admiral Godfrey, who was the head of Naval Intelligence in Whitehall (where Fleming worked as his assistant), will be played by the distinguished actor Samuel West. Admiral Godfrey was reputedly the model for 007’s boss ‘M’ in the James Bond books written by Fleming after the War. Interestingly, Chancellor’s Lieutenant Monday will be a ‘configuration of several of Godfrey’s no-nonsense assistants’.

Fleming, which was originally entitled The Man Who Would Be Bond, is a production partnership between Ecosse Films, Sky, and BBC America. It is being filmed in Hungary, Britain and Jamaica, and will be shown on Sky Atlantic later this year. As Bamigboye put it in his Mail report: ‘It comes when popularity for all things Bond is at a phenomenal level, thanks to the extraordinary billion-dollar-plus success of Skyfall‘.