Looking Back on Barry: When a rare interview resurfaced

The year 2012 was a truly great year for James Bond fans. Not only was there interest in all things ‘Bond’ due to the late Queen ‘parachuting’ into the Olympics Stadium and Craig’s third Bond adventure Skyfall soon became a box-office smash-hit, but other Bond-related special moments also occurred.

The year saw, for example, a rediscovered tape of an interview with the late 007 composer John Barry emerge, and this formed the basis of a new 30-minute BBC radio programme on the Oscar-winning music maestro.

The programme, entitled John Barry: The Lost Tapes and hosted by Eddi Fiegel, went out in the UK on BBC Radio-4 on Tuesday June 26, 2012, and was repeated on Saturday June 30 the same year. In the following, the JBIFC takes the opportunity to revisit this programme, as Barry remains very much part of James Bond’s screen success and his 60th Anniversary in 2022.

The story behind the new interview material was that, in the late 1990s, Eddi Fiegel recorded a rare ‘warts and all’ radio interview with the Yorkshire-born film composer, who sadly died in early January, 2011. Eddi was in the process of writing a biography about Barry. The rare tape, which had been lost until recently, was used by Eddie in the new programme to trace the early career of Barry, and provide an opportunity to hear the blunt-speaking music composer speak about the various stages in his rise to fame. Indeed, as Fiegel pointed out, Barry was ‘a vivid raconteur’.

The programme opened with Barry speaking about the power of emotion that film music can provide, with a typical well-scored movie gripping the viewer for 2 hours in a dark cinema: ‘I love doing that’, said Barry.

As well as talking about his early career with his group the John Barry Seven, and about helping the singer Adam Faith (who gave Barry an opening into the film world), Barry – who started out as a Jazz musician – reflected on how he educated himself in the new exciting world of Rock and Roll, and later on in what was required to become a film composer. Experimentation was the key, and being prepared to tap into new, radical forms of music. He told Fiegel that he had always had success with things that ‘went against the grain’.

Inevitably, Barry touched upon his work on the James Bond movies. At one point, when explaining the impact of the Bond music, he said that Monty Norman’s famous James Bond theme (which was arranged by Barry) had a rhythm never before heard of at the time. Interestingly, Barry also revealed that he did not sit down and concoct a particular ‘Bond style’ – he said his Bond music was a combination of influences and ‘what came out of me’. By the time it came to Goldfinger (1964), for example, Barry said he was determined to do the whole of the music for the movie – both the song and the soundtrack, to integrate them together. As Fiegel noted, it was clear that Barry was really proud of his work on Goldfinger. And, as Barry himself noted, when he saw the final movie, with Robert Brownjohn’s wonderful titles, ‘I thought it was total entertainment’. In fact, audiences applauded the titles. 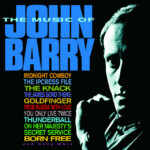 It was evident that, while John Barry was often easy-going and loved to recall the stories and escapades in his colourful life, he was also very single-minded, and underneath the soft demeanour there was a man of steel. The interview with Barry at one point re-visited the now famous clash with Bond producer Harry Saltzman over the theme song for Diamonds Are Forever, a song which was about ‘making love to a diamond’. Saltzman had been heavily critical of the song, just as he had also been with the lyrics to Goldfinger.

In the presence of Don Black and Cubby Broccoli, Saltzman had confronted Barry about the DAF song. After a blazing row between Barry and Harry, in which, according to Barry, Saltzman was so angry that he went ‘as red as his red socks’ and stormed out, slamming the door loudly, Cubby Broccoli broke the stunned silence by saying ‘let’s have a drink’, adding ‘they’d just proceed and do it’. And the rest, as they say, is history, as DAF went on to become another fantastic hit for both Barry and singer Shirley Bassey.

As Eddi Fiegel pointed out towards the end of the programme, in a short space of time in the early 1960s, John Barry rose to become an internationally sought-after film composer, and one of the ‘most successful film composers of the 20th century’. Fiegel also said that the John Barry Estate remains keen to help aspiring young film composers, an approach which itself is inspired by Barry’s own enthusiasm when he was alive to give advice to young people coming into the movie-music industry for the first time.

The 60th Anniversary of the screen James Bond this year (2022) saw a fantastic concert at the Albert Hall in celebration of the music of James Bond, and Barry’s huge contribution to the 007 music soundtracks was again on full display. David Arnold, who played a crucial part in the success of the evening, has spoken in the past about how Barry’s music enthused his own passion for film music and entering that world. And Hans Zimmer, who composed the soundtrack to the most recent Bond movie, No Time To Die, has also acknowledged how influential Barry was on his own contribution to the world of film music. Indeed, Zimmer clearly paid generous tribute to Barry’s music in his own soundtrack for No Time To Die.

Barry, to coin a phrase, remains a diamond who will be forever. 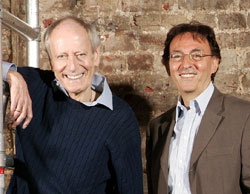