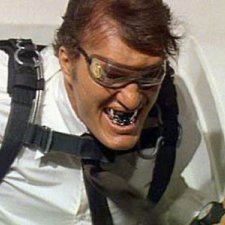 The actor Richard Kiel, who played ‘Jaws’ in two Roger Moore James Bond movies, will be making three appearances in the UK over this coming Bank Holiday weekend (26-27 May, 2013).

Richard, who played the popular steel-teethed assassin in The Spy Who Loved Me (1977) and Moonraker (1979), both directed by Lewis Gilbert, will be making special appearances at the following venues:

Saturday, 25 May: At the Timeless Collectors Show, Mountbatten Centre, Alexandra Park, Portsmouth (along with Blanche Ravelec, who played his girlfriend ‘Dolly’ in Moonraker).

Sunday, 26 May: At Beaulieu Motor Museum, at the very successful ‘Bond in Motion’ 007 cars exhibition (where Blanche will be joining him again).

Monday, 27 May: At a special event entitled ‘An Evening With Richard Kiel’, at the Misty Moon Gallery in London, where he will be interviewed about his career and there will a screening of The Spy Who Loved Me.

It will be a welcome return for Richard and for his British fans. Richard was last on ‘Bond duty’ in Britain in September, 2012, when he was involved in the special Blu-ray Bond Tour of Britain, a Bond films 50th Anniversary campaign which celebrated the release of all 22 Bond films on Blu-ray. This saw him revisit Pinewood Studios and culminated in him joining Britt Ekland at the HMV store in London’s famous Oxford Street.

When he was cast in the role by Albert R. Broccoli in 1976, Richard, who stood at seven foot two and a half inches, proved to be a very popular choice for Moore’s third 007 adventure. In fact, he was so good in the role that the producer decided to have the final scenes rewritten so that they could have Jaws back for Moonraker in 1979. And his popularity with audiences proved this was a canny decision on Cubby’s part.

Bond trivia note: When Sir Roger Moore published his book Bond on Bond in 2012, he recalled his time filming with Richard Kiel, who became a good friend to Roger. The 007 actor reminded readers that Jaws got his name from the ‘ominous, glinting steel teeth he wore’. But Sir Roger also revealed: ‘Poor devil, they were so uncomfortable to wear – Richard could only keep them in for about half a minute at a time’.