James Bond: A Legacy Of Excellence 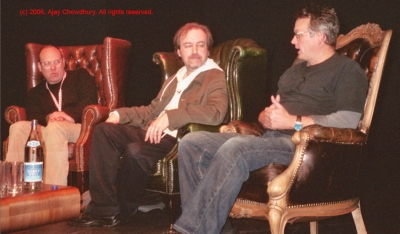 On Friday 3rd November 2006, just hours before the international media were treated to the first official screening of Casino Royale, Promax UK – an annual conference for those working in broadcast advertising and marketing – invited composer David Arnold, title designer Daniel Kleinman and author Charlie Higson, to participate in a discussion titled James Bond: A Legacy Of Excellence at London’s Mermaid Theatre.

The trio gave Promax a fascinating insight into their respective creative worlds, their working methods and processes and how they have adapted and applied these to the ‘James Bond brand.’ It was a unique discussion – particularly in order to listen to individuals from the opposite ends of the OO7 spectrum – film and literary – share their thoughts and anecdotes together.

The session was sponsored by The James Bond International Fan Club and chaired by KKBB contributor Matthew Field.

Matthew Field: Joining us today are three figures who are paramount in creatively shaping the future of one of the most successful film and literary franchises in history: James Bond.

Daniel Kleinman has designed the titles for Casino Royale (his fifth James Bond film) following GoldenEye, Tomorrow Never Dies, The World is Not Enough, and Die Another Day. He has directed music promos for artists such as Fleetwood Mac, Prince and Madonna and in 2004 he founded the production company Kleinman.

Our second guest – David Arnold – has composed, arranged, and produced the score for Casino Royale (his fourth James Bond film). Hailed as one of the most successful British composers of his generation, his scores include Changing Lanes, 2 Fast 2 Furious and most recently Venus and Hot Fuzz.

We’re also joined by writer and performer Charlie Higson, who is currently writing a series of novels based on the childhood exploits of James Bond. Charlie first came to public attention in the BBC comedy The Fast Show and [currently works on the hilarious BBC Radio 4 comedy show, Down The Line http://www.bbc.co.uk/radio4/comedy/downtheline.shtmlHis Young Bond books have been huge hits.] 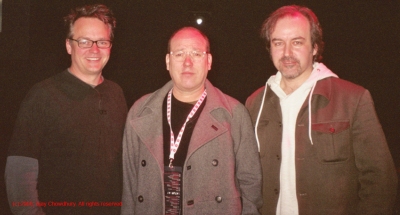 Matthew Field: It’s a dream job isn’t it – working on James Bond? Were you all fans of the movies and books whilst you were growing up?

Charlie Higson: Not really no.

Charlie Higson: We wouldn’t be here would we, if we weren’t? I think we’ve all grown up as kids going to see James Bond films thinking ‘This is just brilliant.’ Yeah, I think we’ve probably all became his fans.

Charlie Higson: I bet you still haven’t got the man.

Daniel Kleinman: I had the man, but my wife invited over some kids and let them play with it and then the man got lost.

Matthew Field: Creatively, does it get harder with each new film – thinking what you can do next?

David Arnold: Well in my experience, when I did Tomorrow Never Dies, I figured no one’s ever going to ask me to do this ever again. So I kind of did everything I ever wanted to do in that film and then at the end of it, when they did ask me to do the next one, after the initial period of elation, it became a sort of blind terror, because at that point if you’ve climbed Everest once and you’ve found a way up it and you’ve stuck your flag in the top. All of a sudden you’re being asked to do it again by a different route, using different methods but still trying to get to the top.

Charlie Higson: The great thing about working on Bond is that you’ve got this fantastic set of elements to work with. He has been around for over fifty years now and it’s totally part of our culture. You’ve got all these fantastic building blocks that you can knock about with. You can have echoes of what’s gone before but you can build something new with it – which I think is what we’re all doing. Danny’s title sequences nod back to what Maurice Binder was doing with his sequences. David’s work echoes that of John Barry and of course still uses The James Bond theme. You’ve got all that fantastic stuff that you can use and yet you can still build something new and exciting with it – which is fun.

Daniel Kleinman: I think that’s right. I think the challenge for all of us, is to make it the same but different which seems anomalous. It’s certainly true that with a fairly tight brief, in a strange way it gives you a freedom to do sort of variations on the theme – be increasingly more inventive within that fairly tight constraint.

Daniel Kleinman: It’s kind of gamble actually isn’t it to say none of those films before existed and we’ve started again.

David Arnold: There’s always been a conundrum with the timeline anyway…

David Arnold: He meets Blofeld in On Her Majesty’s Secret Service and Blofeld doesn’t recognise him and yet in the previous film he had a fight with him at the end of the movie. The point at which you start deconstructing it that much, it’s just pointless.

Matthew Field: In conclusion we couldn’t have a conversation about Bond without me asking you all who your favourite James Bond is….

Charlie Higson: We’re all going to say exactly the same thing, my first film, I remember going to see in a cinema was Thunderball. David you remember You Only Live Twice, and I should think Daniel would probably say the same thing. So it has to be…George Lazenby!

Daniel Kleinman: How about Bob Holness who actually played Bond on the radio I think.

David Arnold: Was he the first ever?

Charlie Higson: No, he wasn’t, Barry Nelson was the first ever on TV in America, but yes, Bob Holness was James Bond before Sean Connery.

Matthew Field: Thanks very much guys. That was great.
(Appaluse)

Promax UK 2006 James Bond: A Legacy Of Excellence produced by Grant Campbell (late of the BBC 2 reality show, The Restaurant). Thanks to Nick Roberts. For more information, see www.promax-uk.org

MATTHEW FIELD is the author of ‘The Making Of The Italian Job’ and ‘Michael Caine, You’re A Big Man’, both published by BT Batsford. He has co-written his next book ‘Deer Hunters, Blade Runners And Blowing The Bloody Doors Off’ which is the autobiography of Academy Award winning film producer Michael Deeley, to be published by Faber & Faber next year. His is a contributing writer to Kiss Kiss Bang Bang magazine. Ajay Chowdhury is the editor of Kiss Kiss Bang Bang magazine.