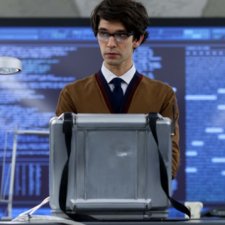 In an announcement issued on July 12, the Bond producers have officially confirmed that Ben Whishaw is indeed ‘Q’ in ‘Skyfall’ this autumn.

There had been speculation for months that the 31-year old British actor was playing the MI6 Quartermaster in the new James Bond movie, but Ben himself remained very tight-lipped in interviews when asked about the subject, even though his own agent had more-or-less confirmed the news some time ago (on November 25 last year).

Producers Michael G. Wilson and Barbara Broccoli said the character of ‘Q’ will be making a welcome return to the James Bond franchise. They issued their new statement, together with the first still of Ben as ‘Q’, on the official James Bond website, 007.com, commenting: ‘It’s a real thrill to confirm the return of Q in SKYFALL, played by the enormously talented Ben Whishaw. We are delighted to have this beloved character back in the series’.

It is not the first time Ben has played a role in a Daniel Craig movie, of course. He had a small but key part in the British gangster film ‘Layer Cake’ (2004), the movie which was a key contributory factor in persuading Barbara Broccoli that Daniel would make a great 007. Ben played the rather naive nephew, Sidney, in the movie, who shoots Craig’s character at the end of the story in revenge for losing his girlfriend to Craig.

In 2011, Whishaw won much praise for his role as Freddie Lyon in the BBC drama series ‘The Hour’. This was about the world of newspaper journalism and was set at the time of the Suez Crisis in 1956. Interestingly, it had an espionage angle (Whishaw’s character Freddie clearly admired the work of Ian Fleming).

Whishaw’s other credits have included ‘Criminal Justice’ and ‘Brideshead Revisited’ and, more recently, he took the role of King Richard in a new BBC adaptation of Shakespeare’s Richard II. Entitled ‘The Hollow Crown: Richard II’, it aired on the UK’s BBC-2 on June 30. The gritty play also starred Rory Kinnear from ‘Skyfall’ and was overseen by ‘Skyfall’ director Sam Mendes. It was the first of four new special BBC adaptations of Shakespeare, designed to help celebrate the 2012 Cultural Olympiad. Mendes is the executive producer on the project.

Speaking to the BBC’s magazine ‘Radio Times’ recently, Ben Whishaw offered a few thoughts on how the media treats (and mis-treats) actors, saying: ‘People think what they want to think about you. They’ll take you seriously or they won’t. You can’t control it’. He added: ‘To be absolutely honest, I’m just thrilled to be working’.

Ben is set to star in David Mitchell’s ‘Cloud Atlas’, based on the acclaimed novel, and is also due to appear opposite Dame Judi ‘M’ Dench in a new stage production, ‘Peter and Alice’, planned for 2013.