Issue no.25 of MI6 Confidential Published 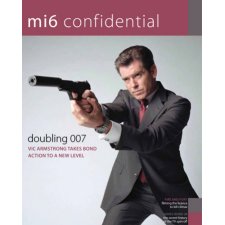 The latest issue of MI6 Confidential magazine, no. 25 in the glossy series, has just been published, with a predominant theme of action and animation, and is available to buy through the JBIFC.

The new issue includes an in-depth interview with action unit supremo Vic Armstrong, a talk with the stunt team behind the fiery climax to Timothy Dalton’s Licence to Kill (1989), an article uncovering the secret history of the often overlooked spin-off James Bond Jr. TV series, an interview with David Picker (the man who did so much to bring 007 to the screen), and a celebration of the successful spy series Archer with the cast and crew.

And for Sean Connery Bond fans, there is also an interesting chat with Lana Wood from Diamonds Are Forever (1971).

The Bond Connection – The cast and creative team talk about their TV spy-spoof, Archer

Issue no. 25 of MI6 Confidential is on sale now, and shipping worldwide.

Did You Know? Vic Armstrong is the first one of the Japanese Ninja commandos seen sliding down the ropes into Blofeld’s volcano rocket base in You Only Live Twice (1967).