In Praise of ‘Goldfinger’: Bond at his best 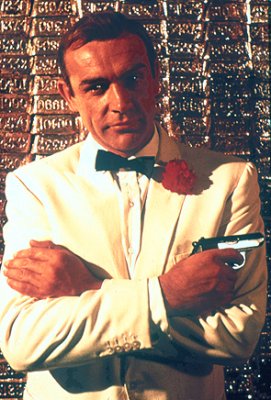 It was the glossy spy movie that created another box-office triumph for EON and United Artists (UA), firmly established actor Sean Connery as a major star, and created the classic James Bond film formula, a template that many of the subsequent 007 movies would successfully follow.

Its director, Guy Hamilton, once said it was the Bond film where all the right elements came together, while set designer Ken Adam remained especially proud of his Fort Knox interior set, with its huge stacks of glittering gold, something that came from his imagination but persuaded millions that this was how it looked in reality. Such was the magic of the movies!

As the UK’s ITV-4 Channel continues its exciting Autumn 007 film season with some screenings of Goldfinger (1964), the JBIFC looks back at some of the key features of the now-iconic James Bond movie, offering (00)7 points about the creative development of the third Bond adventure, some familiar and some less so.

001: Bond creator Ian Fleming penned his seventh 007 novel Goldfinger in 1959, and probably based his new villain on a real-life near-neighbour, the Hungarian architect Erno Goldfinger, who lived in Hampstead in London. The theory of various Fleming biographers is that Fleming named his central baddie after the controversial Hungarian architect because he so disliked the huge Modernist concrete buildings that Erno Goldfinger was fond of designing, many of which Fleming loathed. Fleming took a close interest in the actual shooting of the movie version of his novel and, just as he had visited the sets of the first two Bond films, he paid a brief visit to Pinewood in July, 1964, and chatted to Sean Connery and Shirley Eaton, among others. Tragically, the Bond author did not live to see the final version of the movie, as he passed away on August 12th, 1964, just weeks before Goldfinger was premiered. One suspects, though, that the Bond author would have been really pleased with the final result.

002: Directed by Guy Hamilton (1922-2016), and based on a screenplay by Richard Maibaum (1909-1991) and Paul Dehn (1912-1976), Goldfinger began shooting in March, 1964. Hamilton had actually known Cubby Broccoli for a long time, but when the Bond producer had sent him the script for the first Bond movie, Dr. No, Hamilton had been forced to politely turn it down, as he had family problems at that point. But when Cubby came calling again for Goldfinger, Hamilton quickly accepted the offer, as he could see that ‘it was a very good script’ and that Maibaum had ‘done a very good job’. However, in reality the script had taken quite some time to get right. Maibaum had started work on Goldfinger in April, 1963, but quickly realized that there would have to be some major plot changes to the storyline set out in Ian Fleming’s original novel, especially in relation to Goldfinger’s motivations for raiding Fort Knox.

003: Maibaum delivered an outline treatment in May, 1963, and admitted to the producers that it had been ‘a tough nut to crack’. However, with just a month to go before the start of shooting, there were still anxieties over the script; even Bond star Sean Connery felt it needed more work. In a fascinating note written by Richard Maibaum, and now held in the University of Iowa, Maibaum jotted down some notes on a meeting he had attended with Cubby Broccoli and Connery. Maibaum noted: ‘Connery feels tone of script is all wrong. Wants serious approach with humour interjected subtly as in other films… Thinks script is in bits and pieces and not ‘full’, so far as playing scenes are involved’. Moreover, Hamilton felt that there were aspects to Maibaum’s script that were – in Hamilton’s estimation – ‘too American’. Paul Dehn was called in to write a second draft, and this (in many ways) became the final shooting script. It was said by some on the movie that Maibaum disapproved of aspects of Dehn’s rewrite, but Dehn sought to ease tensions when he sent Maibaum a cable on the day of the premiere, offering his ‘congratulations’ to Maibaum and saying he had been ‘proud to have collaborated with you’.

004: Guy Hamilton had a particular vision of the central villain, Auric Goldfinger. He strongly felt that it was very important to have a villain who would be ‘a convincing threat’. When Cubby Broccoli revealed that he had identified the actor Gert Frobe as an ideal candidate for the role, Hamilton took a look at footage of the actor and agreed that Frobe was ‘absolutely marvellous’. Assured by Cubby that Frobe could speak fluent English, Hamilton later discovered that this was not true! Nevertheless, according to Hamilton, despite the language problem, Frobe was ‘absolutely adorable’ to work with. The German actor was also very popular with others on the set during filming, and would often entertain the other actors and extras during the breaks between takes with what he called his ‘one-man band’ – involving drums, cymbals and horns, which he tied around his body and played them all at the same time. The script re-drafting work by Paul Dehn also gave Frobe some now classic lines, lines which have arguably gone down in movie history: in response to Bond’s ‘Do you expect me to talk?’, Goldfinger answered contemptuously: ‘No, Mr. Bond, I expect you to die!’ Similarly, Dehn’s handiwork can be detected in Goldfinger’s excellent speech about ‘Operation Grand Slam’.

005: The third 007 screen adventure had its world premiere at the Odeon Leicester Square on Thursday, September 17th, 1964. The studio marketing and publicity machine became notably more creative and professional for Goldfinger, and British newspapers were tipped off that the movie would be transported to the Odeon Leicester Square in special gold cans, which created some great advance publicity, and also some wide post-premiere publicity for the film the next day. There was much excitement and anticipation among the waiting crowds that evening, and it was estimated by commentators that between 5,000-10,000 people were in the Square to see the arrival of the main stars. Although it was not the ‘riot’ that some of the British press claimed it was in morning papers the next day, as the crowd surged forward that evening one of the glass doors at the Odeon was smashed! The main star of the film, Sean Connery, was, unfortunately, unable to attend the British opening, as he was away in Spain filming The Hill, but many of the other stars and main members of the extended ‘Bond family’ were able to attend, including Shirley Eaton, Honor Blackman, Gert Frobe, director Guy Hamilton, and EON producers Albert R. Broccoli and Harry Saltzman. Honor Blackman, who arrived in a stunning white evening gown, said afterwards: ‘It was, I think, the most glamorous night of my life’.

006: In many ways Goldfinger was the first of the James Bond movies to really turn what is today called ‘product placement’ into a near full-time business. The central place of the Aston Martin DB5 in the movie exemplified this but quite a range of other products and brands can be glimpsed in the movie, such as items by Gillette. In Ian Fleming’s original novel, 007 had driven an Aston Martin DBIII, but co-producer Harry Saltzman was keen to have Bond drive the latest model and the car-makers were more than happy to oblige. Saltzman also pressed for the car to have some special ‘gadgets’ in the movie, so Guy Hamilton, Paul Dehn, Richard Maibaum and – in particular – designer Ken Adam all contributed design and gadget ideas for the car, including front machine-guns, a bullet-proof rear shield, devices for causing oil-slicks and smokescreens, a Homer radar device, and an arms tray (the latter was not seen in the movie). Most memorable of all, of course, and to the absolute delight of cinema audiences, the car had an ejector seat for ‘unwanted’ passengers!

007: While the first James Bond movie Dr. No (1962) was made for $1m, it grossed approx $16m in cinemas across the world. The second Bond movie From Russia With Love confirmed to Cubby Broccoli and Harry Saltzman, and indeed to United Artists (UA), that James Bond was rapidly becoming a box-office phenomenon. With the release of the third James Bond movie, it was clear to everybody involved that the Bond franchise now had (to borrow the theme-tune singer Shirley Bassey’s lyrics) the ‘midas touch’: it was pure box-office gold. The third 007 adventure Goldfinger was made on a budget of $3m and (it is estimated) grossed nearly $50m worldwide, a huge sum at the time. Adjusted for inflation, this really worked out at $125m. As the famous American film-trade journal Variety put it when the movie opened in the USA, Goldfinger was another ‘box-office bonanza’ from the ‘Broccoli-Saltzman stable’, and the paper predicted ‘this third sample looks like matching the mammoth grosses of From Russia With Love and maybe exceeding them’. In hindsight, this was a very accurate prediction.

In October, 2010, the UK’s Guardian newspaper placed Goldfinger at no.17 in its ‘Action’ category of the ‘Greatest Films of All time’. According to the newspaper, the movie ‘is a compendium of everything one loves about 007 – and with Connery at his apogee’. Moreover, the third Bond film, along with the Beatles, was ‘the most significant and most remunerative British cultural export of the 60s’. 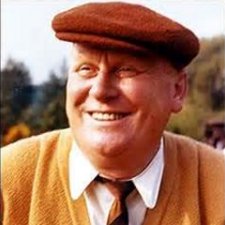 A rare photo of Gert Frobe in between takes