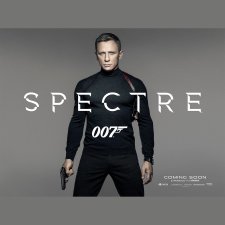 The release of the full SPECTRE trailer on July 22 saw much high praise around the globe and plenty of eager anticipation for the new 007 adventure, which will be premiered in London in October.

The excitement in the UK was especially in evidence, both in the fan community and in the British mass media (such as in local and national newspapers and, in particular, on British TV).

The JBIFC has taken the opportunity to summarise some of the main British media reactions to the exciting preview of Daniel Craig’s fourth James Bond instalment.

The wide publicity kicked off in the UK on the same day as the release of the trailer, with a prominent front-page still from the movie in the London Evening Standard, showing Craig’s 007 kissing Lea Seydoux’s character Madeleine Swann: ‘Bond’s Back (Doing What He Does Best)’. Inside the Standard, readers found two full pages devoted to the new trailer, with plenty of colour stills, and the further headline: ‘We’ve been expecting you, Mr. Bond: spy’s explosive return’. As the newspaper noted, it will clearly be a case of beautiful women, exotic locations and explosive car chases.

Moreover, the trailer shows that Bond will return with his one-liners – after being shown blowing up a baddie in Mexico City, and being quizzed about why he was there by ‘M’, Bond explains to his boss that he was ‘taking some overdue holiday’!

The following day (July 23) saw further extensive coverage of the new trailer in the main British newspapers. Early morning commuters were treated in the free Metro newspaper to an article entitled ‘Get a Sky-fall of 007 Sequel’. According to this, the new movie is packed with ‘car chases, explosions and Bond’s witty one-liners – and that’s just the trailer’.

The trailer also made the front page of the Daily Express, albeit with a publicity photo from the Rome SPECTRE photocall! But inside the Express the trailer was given full-page treatment, with particular emphasis on the new women in Bond’s life. As the Express noted, the new movie is expected to break all box office records. The paper even devoted a small section of its editorial comment (usually reserved for serious political coverage) to 007, under the heading: ‘Welcome return of Bond’.

The Daily Mail, which is the main market rival to the Express, chose to use the release of the trailer to adopt a more negative tone, and claimed that the new movie dips into past Bond films: ‘Haven’t we met before Mr. Bond? Spectres from the past in trailer for 007’s £200m new movie’. The Mail seemed to be arguing that the new movie ‘lifts’ key scenes, characters and set-pieces from previous Bond movies. However, as our very own JBIFC President, David Black, told the grumpy Mail: ‘There are definite nods back to old films, but that’s what people want’. Hear, hear!

The UK’s Daily Mirror newspaper was much more enthusiastic, with a front-page still from the trailer and, inside, an article creatively entitled: ‘Spectrecular – glimpse of new Bond thriller in first full trailer’. In the Mirror’s estimation, the trailer shows that Bond ‘has lost none of his thirst for adventure, excitement, thrills and spills and witty one-liners’. Similarly, the popular Sun newspaper delved into the fine details on view in the new trailer with: ‘View to a Thrill’. Perhaps borrowing from the Mirror (or vice-versa?), the Sun said that Bond fans were ‘treated to a Spectre-acular trailer for the new 007 movie yesterday’.

This excitement was also echoed with front-page and inside-page coverage by the Daily Star newspaper, which headlined its main article inside with ‘Premium Bond’. According to the Star, the new movie is also being given even money by the UK’s leading betting houses that it could be the highest-grossing film of 2015.

The UK’s more high-brow newspapers also joined their down-market competitors with some excited coverage of the new trailer and plenty of colour stills. However, one of them (the Daily Telegraph) also tried to echo the Mail by (rather unfairly) seeking to emphasise a sense of deja vu about the new movie. on the other hand, the Daily Telegraph also recognised that the trailer contains ‘tantalising clues’ that the film will revisit Bond films past when Christoph Waltz comments to Bond: ‘You came across me so many times, yet you never saw me’.

A slightly different angle on the ‘nostalgia’ theme was taken in the coverage of the trailer provided by The Times newspaper, which carried an image of Craig in his white tuxedo (taken from the trailer) on the front page and, inside, devoted a large part of its article to the decision to return 007 to wearing a white dinner-jacket: ‘Bond raises the spectre of the white tuxedo’.

In the view of The Times, the new movie will indeed herald the comeback of the white tux, previously worn by Sean Connery’s Bond and by Roger Moore’s 007. Oliver Spencer, the creative director of Favourbrook, a men’s outfitters in London’s famous Jermyn Street, told the Times that the white dinner jacket came to prominence in the 1960s around the time Connery wore one in Goldfinger (1964).

Connery did so again in Diamonds Are Forever (1971), and Moore continued the tradition in three of his Bond entries. However, the white tux appeared to fall out of favour during the Dalton and Brosnan years.

According to The Times, though, the white tux is back and, moreover, this will herald a new fashion trend. Patrick Grant, creative director of Norton & Sons of Savile Row, told the newspaper: ‘It’s going to be an affirmation that it’s OK to wear these things. Daniel Craig has had a pretty good sartorial record. He’s a very cool Bond’.

Tom Ford, the designer responsible for the white jacket, described it to the Times as a ‘windsor ivory viscose faille dinner jacket with peak lapel, single back vent and ivory grosgrain details’. The tie is a black silk grosgrain diamond batwing bow tie.

So now you know! Ian Fleming would be proud. Welcome back, 007.