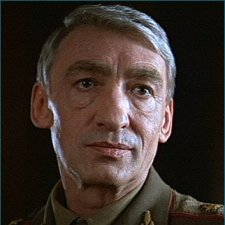 Gottfried, who died on September 1, 2014, after battling cancer, came to international fame in the mid-1990s for his highly memorable role as General Ourumov in the 007 movie, and was quite a catch for the EON Bond franchise.

Having classically trained at Berlin’s Dramatic Art School, Gottfried John was an experienced stage performer (especially in Shakespeare plays) before he entered films. In the 1970s and 1980s John worked closely with Reiner Werner Fassbinder on five highly acclaimed German film projects, and went on to carve out a reputation as one of Germany’s most distinguished actors. He also took roles in some British TV dramas.

He came to wider international attention with his role in Goldeneye as the ruthless and self-serving General Ourumov who, to use M’s words, saw himself as ‘the next Iron Man of Russia’. During the making of the movie, John said of his role: ‘He is a traditional Russian General who tries to re-establish the old system, while using the new Russian mafia to do so. He ends up being destroyed by people who are even stronger than he is. I tried to make him believable and not just someone who is bad. The audience should understand this character: he thinks he can win the battle, but he becomes like a trapped animal’.

Gottfried John’s other film roles included Proof of Life (2000), The Gathering Storm (2002) and The Piano Tuner of Earthquakes (2005). In later years he appeared in a number of German TV productions, his last role being in 2009.

Former four-times 007 actor Pierce Brosnan has paid tribute to Gottfried with the following message: ‘RIP. Gottfried John. My dear friend, we played in the world of James Bond and travelled the world together to celebrate the success of Goldeneye. I am so proud to have worked alongside you. My prayers go out to your family at this sad time in life… Peace be with you. Pierce’.