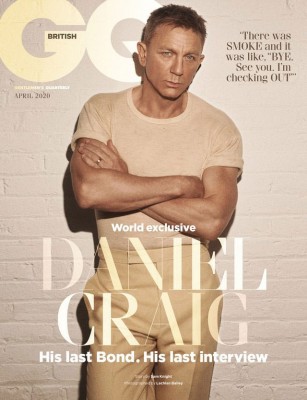 Bond and beyond. James Bond actor Daniel Craig has been interviewed for the new April, 2020, edition of British GQ magazine, and also features prominently on the front cover.

He reflects on his past career, his tenure as 007, and on his possible post-Bond acting plans. There is also fresh detail on what inspired him to become an actor.

The interview, one of the most detailed the 007 star has given in recent times, starts off with some interesting discussion of the final night of filming for No Time To Die, which took place on a damp Friday evening last October, on a backlot at Pinewood. The sequence was a chase sequence in a Havana (Cuba) streetscape, with Craig in tuxedo. According to GQ, the director Cary Fukunaga had already shot the movie’s ending a few weeks before. The final days of shooting were therefore about getting scenes in the can that had been lost or delayed in the previous, exhausting seven months.

After the last shot was completed, Craig had posed with Fukunaga for a special photo and later recalled to GQ: ‘Typically I’m not an emotional person on sets. But there was a sort of pulsing feeling to that day’. The production crew, including many from the day team who had stayed on to witness Craig’s final scene in the evening, gathered next to the Cuban set. Fukunaga gave a short speech, and so did Craig, but struggled through his: ‘I had a whole thing kind of put together in my head that I wanted to say. I couldn’t get it out’.

EON producers Barbara Broccoli and Michael G. Wilson were also present. Broccoli recalled: ‘We knew it was a monumental moment. There wasn’t a dry eye, to be honest’.

This level of fascinating detail is maintained elsewhere in the GQ interview. Interestingly, for example, there is some relatively new background detail on how Broccoli and Craig first met, and on the length of time the Bond producer had been considering him as a potential 007 (apparently from as early as 1998, when she first saw Craig as a priest in Cate Blanchett’s movie Elizabeth).

For general fans of Craig’s acting career, there is also plenty of detail and context. But for Bond aficionados in particular, there is some very revealing coverage of Craig’s approach to playing James Bond and his take on the character created by Ian Fleming. Significantly, Craig reveals that, when he completed his first movie Bond movie, Casino Royale, he had a sense of where he thought the overall story arc should go. After the death of Vesper Lynd, he wanted Bond to ‘shut down’, lose everything and, over the course of several films, find himself again: ‘I think we’ve done it with No Time To Die. I think we’ve got to this place…’.

Craig, who is earning £19million for his final appearance as 007, also revealed to GQ that, under conditions of strict secrecy in a post-production studio in Soho, he has seen a rough cut of the film already, minus the music score and a number of the special effects: ‘I think it works. So hallelujah’.

Illustrated with some glossy photos of Craig specially posed for the magazine, the new April, 2020, edition of British GQ is out now, on sale at all good UK retailers, priced £3.99 (UKP).

Watch this space for further Bond news as it develops. You know the name, and you know the number.

Over and out: the final evening of NTTD at Pinewood.