Goldfinger at 55: An Appreciation

The third smash-hit James Bond movie, Goldfinger, was premiered 55 years ago this month, in September, 1964.

Regarded by many critics as one of the best entries in the 007 series, the film embodied a hugely successful combination of action, humour, glamour, and glossy locations, and confirmed Sean Connery’s hold on the public’s imagination as Ian Fleming’s heroic spy. The JBIFC takes a close look at the film, and offers (00)7 bullet-points of appreciation of Sean Connery’s iconic adventure as Ian Fleming’s secret agent.

001: When it came to casting the main villain, the EON producers Harry Saltzman and Albert ‘Cubby’ Broccoli faced a formidable challenge: how to find a suitable actor who could do screen justice to the role as described by Ian Fleming in his 1959 novel. At one point, Orson Welles was apparently considered for the role, but he demanded too much money. At another stage, Saltzman favoured the Austrian-American actor Theodore Bikel. However, Cubby Broccoli preferred the German actor Gert Frobe and insisted they hire Frobe.

002: Directed by Guy Hamilton, and based on a screenplay by Richard Maibaum and Paul Dehn, Goldfinger began shooting in March, 1964. Hamilton was worried about Gert Frobe’s inability to speak fluent English, but as soon as Saltzman, Broccoli and Hamilton saw early rushes of Frobe as Goldfinger, the trio knew immediately that the German actor had the midas touch.

003: Maibaum had started work on Goldfinger in April, 1963, but soon realized that he would have to introduce some major plot changes to the storyline set out in Ian Fleming’s original 1959 novel, particularly in relation to Auric Goldfinger’s motivations for raiding Fort Knox. Maibaum delivered an outline treatment in May, 1963, and admitted to the EON producers that it had been ‘a tough nut to crack’. However, anxieties remained. Shortly before filming commenced, Paul Dehn was called in to write a quick second draft, and it was this treatment that, in many ways, became the final shooting script.

004: The third James Bond movie had its premiere at the Odeon Leicester Square on Thursday, 17th September, 1964, and there was much excitement and anticipation among the waiting crowds, estimated to have been between 5,000-10,000 people, all hoping to see the arrival of the main stars. At one point, as the crowd surged forward, one of the glass doors of the Odeon was smashed! It was further evidence that Bond-mania was growing relentlessly, and created some great media publicity for the movie.

005: Although the main star of the film, Sean Connery, was unable to attend the British opening (as he was away in Spain, filming The Hill), many of the other stars and main members of the extended ‘Bond family’ were able to attend, including Shirley Eaton, Honor Blackman, Gert Frobe, director Guy Hamilton, Cubby Broccoli and Harry Saltzman. Honor Blackman, who arrived in a stunning white evening gown, said afterwards: ‘It was, I think, the most glamorous night of my life’.

006: Sadly, it is not known what Bond creator Ian Fleming thought of the movie, but the author had paid a brief visit to the Pinewood Studios set of Goldfinger in March, 1964, and chatted to Sean Connery and Shirley Eaton on Pinewood’s ‘D’ Stage. Tragically, Fleming died in August, 1964, just a few weeks before the UK premiere of the movie in September.

007: As Bond historians have pointed out, the influence of Goldfinger endured for many years afterwards, and is still seen by many 007 aficionados as creating the Bond template for many of the subsequent entries in the EON franchise. The film not only fanned ‘Bond fever’ but also had a major cultural impact: as one British newspaper (The Guardian) put it in 2010, when it included the movie in its survey of the Greatest Action Films of All Time, James Bond became: ‘Along with the Beatles, the most significant and most remunerative British cultural export of the 1960s’. 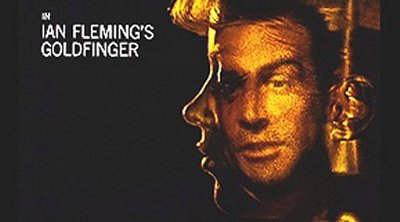