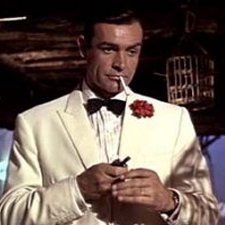 s Bond fans across the world celebrate the golden anniversary of the now classic James Bond movie Goldfinger (1964), the JBIFC looks back on some familiar and less familar aspects of Sean Connery’s third adventure as Ian Fleming’s 007 and its opening in the UK.

Richard Maibaum started work on Goldfinger in April, 1963, but quickly realized that there would have to be some major plot changes to the storyline set out in Fleming’s original novel, especially in relation to Goldfinger’s motivations for raiding Fort Knox. He delivered an outline treatment in May, 1963, and admitted to the producers that it had been ‘a tough nut to crack’.

However, with just a month to go before the start of shooting, there were still anxieties over the script, and Sean Connery also felt it needed more work. In a fascinating note written by Richard Maibaum, and now held in the University of Iowa, Maibaum jotted down some notes on a meeting he had attended with Albert R. Broccoli and Connery. Maibaum noted: ‘Connery feels tone of script is all wrong. Wants serious approach with humour interjected subtly as in other films… Thinks script is in bits and pieces and not ‘full’, so far as playing scenes are involved’.

Paul Dehn was called in to write a second draft, and this (in many ways) became the final shooting script. It was said by some on the movie that Maibaum disapproved of aspects of Dehn’s rewrite, but Dehn sought to ease tensions when he sent Maibaum a cable on the day of the premiere, offering his ‘congratulations’ to Maibaum and saying he had been ‘proud to have collaborated with you’.

The third 007 adventure had its world premiere at the Odeon Leicester Square on Thursday, September 17, 1964. The marketing and publicity machine became notably more professional for Goldfinger, and British newspapers were tipped off that the movie would be transported to the Odeon Leicester Square in special gold cans, which created some great advance publicity, and also some wide post-premiere publicity for the film the next day.

There was much excitement and anticipation among the waiting crowds that evening, and it is estimated that between 5,000-10,000 people were in the Square to see the arrival of the main stars. Although it was not the ‘riot’ that some of the British press claimed it was in morning papers the next day, as the crowd surged forward that evening one of the glass doors at the Odeon was smashed.

The main star of the film, Sean Connery, was, unfortunately, unable to attend the British opening, as he was away in Spain filming The Hill, but many of the other stars and main members of the extended ‘Bond family’ were able to attend, including Shirley Eaton, Honor Blackman, Gert Frobe, director Guy Hamilton, and EON producers Albert R. Broccoli and Harry Saltzman. Honor Blackman, who arrived in a stunning white evening gown, said afterwards: ‘It was, I think, the most glamorous night of my life’.

Film fans are very familiar with what is called ‘product placement’ in movies today, but back in the 1960s this was a relatively new trend. However, in many ways Goldfinger was the first of the Bond movies to really turn this into a near full-time business. The central place of the Aston Martin DB5 in the movie exemplified this but, if you look closely, quite a range of other products and brands can be glimpsed in the movie, such as items by Gillette. In Ian Fleming’s original novel, 007 had driven an Aston Martin DBIII, but producer Harry Saltzman was keen to have Bond drive the latest model and the car-makers were more than happy to oblige.

Saltzman also pressed for the car to have some special ‘gadgets’ in the movie, so Guy Hamilton, Paul Dehn, Richard Maibaum and – in particular – designer Ken Adam all contributed design and gadget ideas for the car, including front machine-guns, a bullet-proof rear shield, devices for causing oil-slicks and smokescreens, a Homer radar device, and an arms tray (the latter was not seen in the movie). Most memorable of all, of course, and to the delight of cinema audiences, the car had an ejector seat for unwanted passengers!

While the first James Bond movie Dr. No (1962) was made for $1m, it grossed approx $16m in cinemas across the world. The second Bond movie From Russia With Love confirmed to Broccoli and Saltzman, and indeed to United Artists (UA), that Bond was rapidly becoming a box-office phenomenon. With the release of the third James Bond movie, it was clear to everybody involved that the franchise now had the ‘midas touch’: it was pure box-office gold. The third 007 adventure Goldfinger was made on a budget of $3m and (it is estimated) grossed nearly $50m worldwide.

As the famous American film-trade journal Variety put it when the movie opened in the USA, Goldfinger was another ‘box-office bonanza’ from the ‘Broccoli-Saltzman stable’, and the paper predicted ‘this third sample looks like matching the mammoth grosses of From Russia With Love and maybe exceeding them’. How right they were!

Actor Jack Lord, who had played Bond’s CIA contact Felix Leiter in Dr. No, was approached to play the role again in Goldfinger, but apparently demanded equal billing with Sean Connery and also a huge fee. The role went to Cec Linder instead.