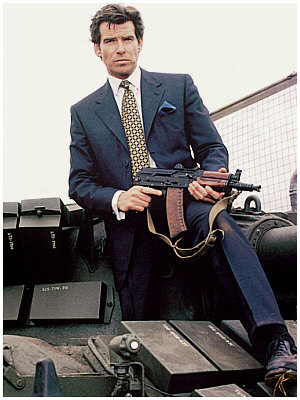 Twenty-five years ago this month, in April, 1995, the Main Unit of the James Bond franchise spent two busy days shooting at the Nene Valley Railway, near Peterborough in Cambridgeshire, for Pierce Brosnan’s debut 007 adventure Goldeneye.

The production’s Second Unit had already carried out about three days preparatory filming at the same location beforehand, concentrating on some action shots with a locomotive.

It was a nice return back to the Nene Valley Railway (NVR) for Ian Fleming’s James Bond, a volunteer-run railway which had been used for some key sequences for Roger Moore’s 007 adventure Octopussy in 1982.

The JBIFC, which had a man on the ground (Steve) to watch the filming, takes the opportunity to look back on the 1995 NVR sequences, as the movie celebrates its 25th anniversary in 2020.

Interestingly, the Goldeneye shoot was also a return back to the  NVR for Pierce Brosnan, as he had previously filmed at the railway back in 1988, where he had made an entertaining and rather Bond-like advert for Diet Coke, which was premiered on TV during a commercial break in the 1988 American Superbowl.

Now Pierce was back again, but this time officially in the role he had been so frustratingly denied in 1986: James Bond, secret agent 007. It must have been a big source of personal satisfaction for him. The NVR had been approached by EON as early as August, 1994, when location scouts made an undercover visit to the picturesque railway to find out how it had changed since 1982. An agreement with the NVR was quickly reached.

The 17th EON Bond movie, under the firm oversight of new Bond director Martin Campbell, shot two important sequences on the NVR in early April, 1995, which involved a Russian armoured train, Bond’s attempt to stop it using a ‘borrowed’ tank, and his daring rescue of Natalya (played by Izabella Scorupco). A brief shot of Trevelyan’s helicopter taking off from the top of the train was also taken.

The Bond crew, consisting of about 30 main workers, with plenty of support equipment, cables, caravans and vehicles, plus a fire-crew and ambulance, utilised three key sections of the NVR.

The first was an old Sugar Beet factory at Woodston, fairly close to Peterborough city centre. The old factory buildings were (usefully) connected to NVR’s tracks, enabling the train to ‘park’ near the buildings (the area is now part of the Sugar Way housing estate in Woodston). This large maze of grim-looking chimneys and steel-framed buildings became a Russian rail depot. Shots were taken of Natalya being forcibly dragged and put on a carriage of the armoured train by a harassed-looking General Ouromov (played by Gottfried John), with Xenia Onatopp (Famke Janssen) also looking on. A brief shot was also taken here of Bond’s tank coming upon the scene, observing what was going on.

A second shorter sequence was shot at the NVR’s Ferry Meadows Station, showing the armoured train hurtling down the track, with the station decorated to look like a stretch of railway in St. Petersburg.

A third, more technically complex, sequence (or series of scenes, to be accurate) was shot at the NVR’s Mill Road Bridge at Castor, which is located between Ferry Meadows Station and the NVR’s main Wansford Station, and which had been ‘transformed’ beforehand to look like a tunnel. 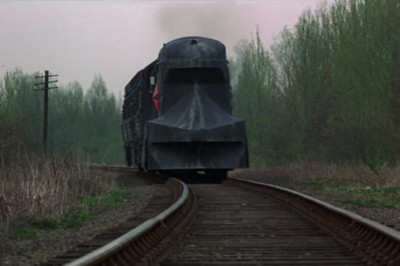 In fact, the SFX and technical work on these sequences was a great example of the genius of EON’s dedicated behind-the-scenes crew, who took much pride in their work and attention to detail.

The locomotive used for the formidable-looking armoured train, with its distinctive and sinister snowplough-shaped front, was an old British Rail class 20 diesel locomotive with a couple of Mk. 1 coaches.

It had been transformed to resemble a Russian Soviet-style military train, complete with bodyside Red Star, side-skirts and a matt black colour scheme (suitably ‘weathered’), all overseen by the wizardry of Production Designer Peter Lamont, a veteran by then of 18 James Bond films (including Octopussy).

The converted locomotive had been transported by road to Wansford Station from the main studios at Leavesden, near London, using a low-loader. It was watched carefully at the NVR by a tough-looking security guard provided by the studio, as it was stored in a train-shed at Wansford Station. And when it had arrived, the NVR’s volunteer staff could not help but be very impressed, as was everyone else who eventually saw it.

The key, and most dangerous, shots took place at the Mill Road Bridge, on the second day of Main Unit filming. One had to feel sorry for New Zealand-born Martin Campbell, whose working day would start at 5.30am each morning, and who was suffering from a heavy cold at the time. The second day of Main Unit filming also saw Pierce Brosnan arrive and spend the day shooting his various takes, including some with Izabella Scorupco. The pair were based for the day in some caravans in a farmer’s field next to Mill Road Bridge, under the watchful eye of Geoff Freeman, the Unit Publicist. 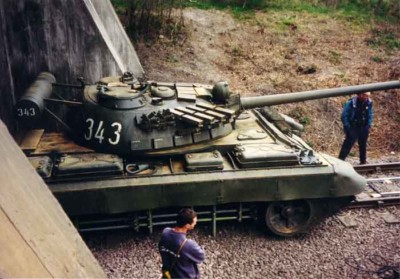 At the Mill Road Bridge, Bond (as we now know) parks his tank, hiding it in the tunnel entrance and waiting for the villain’s oncoming armoured train, at which he fires in an attempt to derail the speeding locomotive.

When this fails, and he just sets fire to the train’s front-engine, 007 leaps from the tank just before the train crashes into it. It looks truly spectacular in the completed movie, and was equally spectacular in real-life, although done in such a way as to minimise damage.

According to NVR staff, the production’s original plans proposed to crash the train into a real 36-ton Russian tank(!), but this ambitious plan was quickly changed when the NVR’s own structural engineer made it clear that he was not keen on the EON crew crashing the train into a real tank, as he was fearful this would cause considerable damage to both the track and the bridge.

Consequently, the sequences shot on the second day of main NVR filming used a ‘tank’ that was, in reality, a fibre-glass shell. Similarly, to minimise any potential damage to the bridge, the bridge had been heavily disguised as a concrete tunnel mouth (complete with a Red Star) using a combination of plywood, plaster, dark black curtain material and much scaffolding. 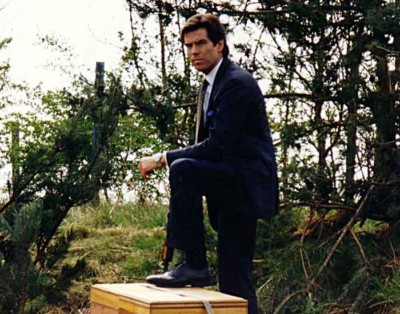 During the morning, Pierce had to do a number of takes of Bond clambering out of the tank and quickly jumping down onto the side of the track. Campbell made him do this a number of times before he was satisfied.

Pierce was also seen crouching next to a bush, looking back on the scene.

Later, both he and Izabella had to be filmed as if they had just leapt from under the carriage, and both ran up and down the track a bit to get breathless and look suitably relieved at having just escaped by a whisker.

Some shots were also taken of the train hurtling down the track towards the tunnel, with cameras set at different angles and points-of-view (but much of this had been shot beforehand by a Second Unit in the days leading up to the arrival of the Main Unit on the two main days).

One problem that occurred is that some of trees and bushes, among which countless Russian-style firs, pine trees and other foliage had been placed along the sides of the railway, unintentionally caught fire! The train was also instructed to move back up the line at least a couple of times and then to restart its speedy journey down towards the ‘tunnel’, after the SFX people had set up some flames on the train.

A ‘Thunderball’ of an Explosion

But the ‘main event’ of Day 2 (so to speak) took place in the afternoon, when a huge fireball explosion was finally set off at 4.40pm, designed to create the illusion that the train had collided into the tank (in the actual film, models and special effects, overseen by the SFX guru and Minature Effects Supervisor Derek Meddings, were partly utilised to complete this wonderful illusion). The NVR tunnel explosion took much preparation and various onlookers (word had got round in nearby Castor Village that Bond was at the Bridge) were pushed right back in case of flying debris, together with anybody else not directly involved with the big bang. Cameras had to be carefully set up and re-checked, while fire crew stood by. Stunt stand-ins for Pierce and Izabella were had been used earlier in the day (watched with close interest by Pierce), shot rolling out from under the carriage. 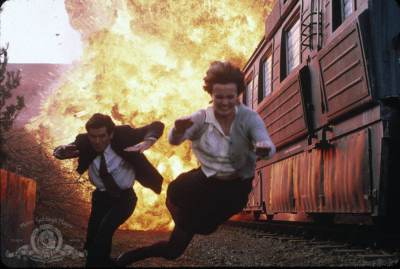 However, it was Brosnan and Scorupco’s turn to prepare for action, and it must have felt tense to have to wait, especially when lots of preparation, safety checks, and positioning of cameras has to take place for such a ‘one-off’ event (this alone took over an hour). Brosnan and Scorupco thenhad to leap on to a padded mat against the backdrop of the explosion (and, when this took place, some burning debris came down just behind them – it’s not all glamour shooting a 007 movie!).

And what a major bang it was! The main locomotive, which could be inspected afterwards, was left heavily coated in black soot and the dramatic effects of the smoke from the fireball, as was the nearby rail track and surroundings. The heavy smell of burning remained in the air for a good while afterwards. It had taken much preparation and tense waiting, but was more than worth it. Campbell seemed very pleased, as were many of the crew.

After this sequence was completed, many of the local onlookers who had gathered to watch seemed satisfied and drifted off home. And it did seem as if the main filming was over. However, in the late afternoon, Campbell set up his cameras slightly further down the track from the bridge, in a cutting alongside the track on what is known as Castor Bank, and out of sight to most of the people who were still around, unaware of what was going on.

This was for the scene where Bond sits with Natalya beside the track, both having just escaped with their lives from the explosion. Some dialogue was shot and the inevitable romantic kiss took place. Both Brosnan and Scorupco did some brief bit essential preparation for this scene just before it was shot – Brosnan ran up the side of the track to get out of breath, while Scorupco did some press-ups.

The important scene was in the can by 5.45pm, and Brosnan then walked back to his caravan, pausing to pose for a group photograph with the fire-crew on the way. Isabella Scorupco also made her way back to the Unit ‘base’, pausing at a catering table to grab a (no doubt badly needed) bread roll. Brosnan changed into a black leather jacket and was driven away at 6.00pm, generously waving to us as he went. It was a great way to end the day for those who witnessed this, including our man from the JBIFC.

It was, as you might say, another golden high to an eventful and very memorable day.

Natalya: ‘Do you always do that to the transport you use?’ Bond: ‘Standard operational procedure…’.