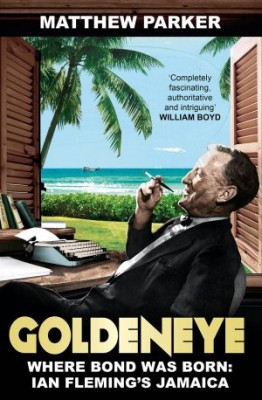 The exciting new book by writer and historian Matthew Parker, Goldeneye, Where Bond was Born: Ian Fleming’s Jamaica, has received high praise and lots of enthusiasm from a range of different reviewers and media outlets in Britain.

Nicholas Rankin, who has written on Ian Fleming’s wartime exploits himself, has said Matthew Parker’s ‘brilliant book’ is ‘indispensable’, while literary critic Tony Parsons stated: ‘This is the Big Bang of Bond Books’. The UK’s Daily Telegraph newspaper also commented: ‘Bond himself might have been a touch jealous’.

The new book, which was published in the UK by Hutchinson last week, re-tells the fascinating story of 007 author Ian Fleming’s passionate love of Jamaica, but with plenty of fresh material on the author’s colourful life on the sunny island and also interesting new insights into his creation of the most famous secret agent in the world. It is a superb read.

Parker, using his own extensive knowledge of the history of Jamaica, has wedded this to a detailed investigation of Fleming’s creation of James Bond, the key influences on this, and the various stages in the literary evolution of the Bond novels between 1952 and 1964, a period when Jamaica itself saw many social and political changes and its eventual transformation into an independent nation. Parker’s thesis is that Jamaica played an even more important role in Fleming’s Bond books than previous biographers have realised.

Just as Jamaica and its atmosphere provided the main story-backdrop in at least three Fleming 007 novels and a number of his short stories (such as Octopussy), the story of Fleming’s relationship with his beloved Island also runs right through Parker’s extensively researched book.  Indeed, while writing his study, Parker was given exclusive access to the Goldeneye archive and the book was written with the support of Island Outpost, which now own Goldeneye.

According to Parker, even Fleming’s very first visit to Jamaica in 1943 sounds like something straight out of a spy novel. As wartime assistant to the Director of Naval Intelligence in Britain, Fleming flew from Miami to Kingston to attend an Anglo-Amercian naval conference and also, at the same time, to investigate rumours that Axel Wenner-Gren, a rich Swede and possible Nazi sympathiser, had illicitly sponsored the construction of a secret German submarine-base at Hog Island, near Nassau.

Fleming was accompanied on this wartime mission by his close friend Ivar Bryce and, while the pair (probably much to Fleming’s disappointment) found no truth to the submarine-base rumours, what they did do was spend some time exploring the local scenery. In hindsight, it is now clear that Fleming fell madly in love with the Island there and then. And, as they left, Fleming famously told his friend: ‘When we have won this blasted war, I am going to live in Jamaica… swim in the sea and write books’. The rest, as they say, is literary history. Three years later, Fleming returned and purchased 14 acres of land on the north coast of the Island, where he had a bungalow constructed, based on his own unique designs. He christened the house ‘Goldeneye’, a name originally given to one of his secret wartime intelligence operations.

Over the period of the 1950s and early 1960s, when Fleming took his annual two-month vacation at Goldeneye, the author wrote a James Bond adventure there every winter until he sadly passed away in 1964, aged just 56 (and, ironically, in the same year that the third James Bond movie, Goldfinger, was to storm the box office and arguably lay the template for what became the global James Bond film phenomenon).

Matthew Parker’s new book has also been extensively reviewed in publications such as The Times, The Sunday Times, The Observer, The Spectator, the Literary Review, and the Daily Mail. There is also a special article by Parker himself in the latest edition of the BBC History magazine (September, 2014).

Goldeneye, Where Bond was Born: Ian Fleming’s Jamaica is published in hardback in the UK by Hutchinson, 400pp, £20, and is also available to purchase as an e-book, £9.98.