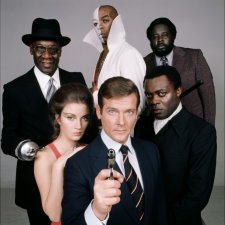 The JBIFC is very sad to report that the actor and acclaimed dancer Geoffrey Holder, who played the highly memorable role of Baron Samedi in Roger Moore’s debut 007 movie Live and Let Die (1973), has died, aged 84, in Manhattan, USA. A spokesman for his family said the cause was complications of pneumonia.

Geoffrey Holder was a larger-than-life man in many ways: not only was he very tall (6ft 6ins), but he had a very deep West Indian voice and a truly fantastic laugh, something that was put to excellent use in Live and Let Die. In fact, Holder’s full-bodied and rather haunting voice so impressed director Guy Hamilton and also the Bond producers that his character, the legendary Baron Samedi (the voodoo ‘God of cemeteries’ and the ‘man who could not die’) was given a very special honour: at Holder’s suggestion, Baron Samedi appeared in the very last shot of the movie, laughing mockingly and sitting on the front of Bond and Solitaire’s train as it sped through the night and the end-credits rolled!

Indeed, Holder had a notably extrovert personality which beguiled and charmed everybody who met him. He was also a man of many talents: he was a dancer, choreographer and actor, as well as an author, composer, photographer, costume designer, and expert cook. He also became something of an expert on Caribbean folklore and cooking. He was, in addition, a well-respected painter and sculptor, who was especially keen to help encourage the arts across America and to promote his native West Indian culture, of which he was very proud. He was particularly keen to enthuse a new generation of young people about dance, theatre and the arts generally.

After taking over a dance company and becoming its director and lead performer, Holder made his Broadway debut in 1954 as a dancer in Truman Capote’s musical House of Flowers. And the name of his dancer in this musical was… Baron Samedi! Holder also began to take on film roles in the 1960s, including a part in Doctor Dolittle (1967).

But it was his role as Baron Samedi in Live and Let Die that brought him to international attention. In fact, the role of the legendary Baron Samedi in the movie could have been tailor-made for Mr. Holder. In the film’s plotline, which had a screenplay by Tom Mankiewicz and was based loosely on Ian Fleming’s second James Bond novel, Mr. Big (AKA ‘Dr. Kananga’, played by Yaphet Kotto), employs a real-life man to impersonate the mystical Samedi and present him as the ‘Chief of the Legion of the Dead’, an immortal and frightening figure of legend. It was the manipulative Mr. Big’s devious way of instilling fear and obedience on his island and thus protecting his thousands of acres of poppy fields.

James Bond, of course, sets out to expose and destroy Mr. Big’s sophisticated drugs operation and also helps demolish the myth of the Baron ‘who cannot die’ in the process. In a confrontation at a graveyard voodoo ceremony, where Solitaire is about to be bitten to death by a snake, Bond shoots the Baron after he has risen from the grave, revealing that this particular Baron is, in reality, just a poor mannequin.

However, Bond is then faced with the real Baron Samedi and, after a fight, eventually manages to push Samedi into a coffin full of poisonous snakes. But is it really the end of Samedi? In a nice touch to the movie’s storyline, cinemagoers were left with the intriguing question of whether the Baron really had died!

Geoffrey Holder was extremely proud of his role as Samedi in Live and Let Die and relished the part. The eighth 007 film had also allowed him to show off his skills in dance choreography: he was the official choreographer on the movie, had overseen the audition and selection of dancers from Kingston in Jamaica, and had arranged the distinctive San Monique dance sequences in the film.

On the other hand, there was one aspect of Live and Let Die that Geoffrey Holder was a bit less keen on: he shared with Roger Moore a phobia about snakes! According to Sir Roger in his recent memoirs, My Word Is My Bond, Holder was ‘horrified’ when he read in the script that he would have to fall backwards into a coffin full of them: ‘Don’t worry’, said the crew on the set at Pinewood: ‘They’re not biters, they’re crushers!’

Nevertheless, the part of Samedi served Holder very well in his long and distinguished career. Not only had Samedi (in a sense) kick-started Holder’s theatre career back in the 1950s, but the legendary character also rose from the dead again years later: Holder resurrected the role in one of his later dance routines, Banda, in 1982, to much praise from the critics.