From Southbank With Love 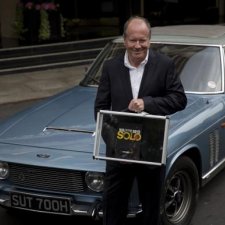 Following the special Solo launch event yesterday at the Dorchester Hotel, new James Bond continuation author William Boyd was interviewed live at on stage this evening (September 26) in London before an enthusiastic audience of Bond fans, Boyd fans and other members of the public.

The interview was given in the Queen Elizabeth Hall at the Southbank Centre, by the River Thames in central London, with a large image of the Solo dustjacket as backdrop. It was followed by a special signing session, where Mr. Boyd generously signed copies of his new James Bond thriller.

Before Mr. Boyd appeared on stage, Ian Fleming’s niece, Lucy, gave a special introductory speech. She said ‘Will’ is a great choice to write a new James Bond novel, and pointed out that Boyd is a real expert on Ian Fleming. She also expressed pleasure at the way Boyd has managed to actually get her uncle’s wartime story into the novel (via the 30AU commando connection, which comes in the first chapter of the book).

When Boyd then appeared on stage, he sat down and was interviewed by Olivia Cole, the literary editor of GQ magazine. Cole, a former journalist who started out on the ‘Londoner’s Diary’ at the Evening Standard, appeared to be quite nervous at first and, at times, did not appear to be well-briefed, referring at one point to having read On His Majesty’s Secret Service.

Some of her interview points were also too dependent on what had appeared in today’s newspaper coverage of Boyd’s new book. Nevertheless, once the interview had fully got underway, a nicely relaxed atmosphere developed, helped considerably by Boyd’s easy-going manner and his notably dry sense of humour.

Boyd kicked off the evening by taking to the podium and reading out chapter 1 of his new Bond novel, which clearly had the audience transfixed while he did so. During the subsequent interview, Boyd was asked how he came to Bond? He said he had read Fleming when he was a teenager, and later returned to Fleming when he was doing some background research on the writer Evelyn Waugh. Waugh had been a friend of Fleming’s wife, Ann, but Ian Fleming and Waugh had hated each other. Moreover, in their private correspondence, Ann and Waugh had been very dismissive of Fleming’s writing, and both would refer to Fleming as ‘thunderbird’.

Nevertheless, Boyd had decided that, despite their mutual loathing, both Ian Fleming and Evelyn Waugh had something in common: both were ‘in a hurry to die’. Both authors basically wrecked their health far too early.

Boyd also explained and emphasised that he became fascinated by the character of James Bond, as devised by Fleming. Boyd pointed out that Fleming’s literary creation is far more nuanced and complex than the James Bond of the films.  In fact, like his creator, the literary Bond ‘was very complex’, and this was partly a reflection of Fleming’s own complex personality (Fleming often became quite depressed and downcast). Indeed, noted, Boyd, one can trace Fleming’s very up-and-down relationship with his creation throughout the books.

Remaining on this point, and turning to Fleming’s technique as a writer, Boyd also said he was interested in Ian Fleming’s work because, from a writer’s point of view, you can see Fleming at points not quite knowing what to do next with his creation, and getting stuck at times, sometimes resorting to ‘coincidence’ to get his hero out of a spot in the plot. Boyd said one of the things writers do in general is to try not to resort to coincidence too much but, on the other hand, it was still forgivable in Fleming.

Boyd also made some interesting points about the numerous clues to James Bond’s background that appear in the Fleming novels, if you read them carefully. Boyd said he saw potential in World War Two being part of his own Bond story, after reading that Fleming had served in the War. In fact, Boyd’s decision to add a wartime dimension to his Bond was influenced by this background material. He said James Bond, as conceived by Fleming, was born in 1924, left school in 1941, and was in Berlin in 1945.

So, in Boyd’s estimation, it seemed appropriate to make Bond part of a 10-man 30AU commando unit that had landed in France on D-Day in 1944, and this tied in nicely with the real-life Fleming connection (Fleming had helped found 30AU Commando Assault Unit, which carried out special missions). It also enabled Boyd to allow Bond to slip into what Boyd termed (in a nice turn of phrase) ‘the haunted forest of memory’.

Similarly, returning to the complexity of James Bond as a literary character, Boyd pointed out that, in the Fleming novels, Bond is actually very well read; he left school at 17 but had ‘a book-lined flat’ in London. At another stage in the interview, Boyd said that, when he was reading Fleming’s novels, he noticed one or two unattributed quotes appeared. Boyd said he had made an effort to track down these quotes, with one turning out to be a quote from Milton’s famous Paradise Lost, and another from an American poet.

Boyd also reminded the audience that, despite having very 1950s attitudes in many ways, the literary James Bond was also very unusual for his time because, unlike most males at that time, Bond had an eye for detail: he was very interested in the details of fashions, perfumes, products, and so on, which was very modern, and almost metrosexual. Fleming had had an eye for detail, and similarly gave it to his creation, James Bond. This also rooted Bond in a lot of realistic background detail, adding to the glamour and success of the novels for audiences at the time.

The Evolution of Solo

At another juncture in the interview, Boyd pointed out that, in a sense, he was writing a history novel (it is set in 1969, and makes references to Vietnam and other late 1960s events). Boyd said, in this sense, his novel has a ‘time-travel’ aspect: wandering up and down the King’s Road, James Bond was bound to notice the changing times and changing fashions, such as mini-skirts and so on. Boyd had tried to reflect this in his novel.

Turning to his relationship with the Fleming estate, Boyd said he had emphasised to the estate that he wanted to write a ‘realistic’ novel, and that realism would also stretch to the main villain and his henchmen. He wanted to create, not a Blofeld-style villain, but a ‘really nasty psychopathic villain’, a ‘nasty, real-life mercenary’ in Africa whio had suffered disfiguring injuries to one side of his face in a brutal civil war. Furthermore, in the second half of Solo, Bond goes to Washington DC, which, according to Boyd, was actually ‘a very dangerous place’ in 1969, as there had been riots, assassinations and civil disorder in some parts of the American capital. Boyd said he had spoken to friends who had lived there at the time.

Responding to a member of the audience in the ‘Q and As’ session after the main interview, Mr. Boyd, referring to his own Bond research and to the 007 continuation novels by other authors, said he had only read Kingsley Amis’s Colonel Sun. However, after he had finished Solo, he decided he should also read Devil May Care by Sebastian Faulks, just to ensure there were no major clashes between what they had both written in relation to Bond. He also said he knows Faulks as a friend, and felt that Faulks had made a really good job of his own Bond novel, managing to capture the Fleming writing style very closely.

In response to some other questions from the audience, Boyd revealed that Fleming’s novel From Russia, With Love is his favourite Bond novel, but that he also likes the final Fleming adventure The Man With The Golden Gun, as it has a straightforward ‘get that man’ mission in the storyline. He added that, in fact, he is currently writing a new introduction to a reprint of Fleming’s last novel.

Finally, Boyd spent a short while reflecting on the sheer ‘razmattazz’ of being the latest James Bond author, with a special launch at the Dorchester, signed copies of his novel being sent out in fast cars and onto planes, and so on, and expressed his continued ‘astonishment’ at the global nature of the Bond phenomenon, which he felt very privileged to now be a part of.

Note: BBC Radio-4 in the UK will be broadcasting a ten-part abridged version of Solo as part of its ‘Book at Bedtime’ series in the evenings, starting on Monday, September 30, at 10.45pm. It is abridged by Libby Spurrier and will be read by Paterson Joseph. The BBC’s Radio Times magazine will also carry a special interview with Boyd by film critic Barry Norman.